Over the last couple of years the mysterious mass deaths of birds, bees, fish and other wildlife has been raising alarm bells for many in the scientific community. While the reaction from those in the mainstream news has been largely dismissive, it’s getting hard to ignore the numbers.

For instance, did you know that there have been over 6.7 Million Bat deaths in the U.S. over the last 5 years?

And what about all the strange die-offs this years?

Residents in a small Norwegian town woke to find millions of dead fish on the shores of Kvaenes, in Nordreisa. The school of Herring literally blanketed the entire shoreline. 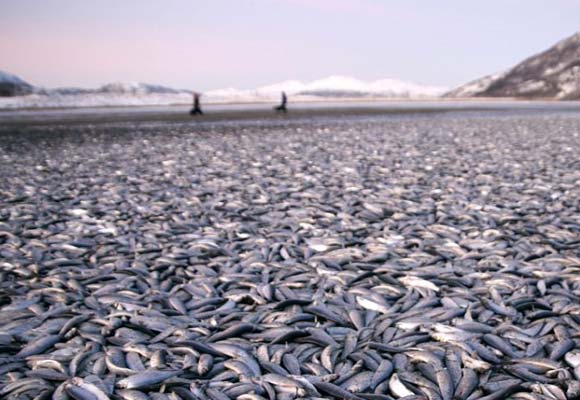 An estimates 100 tons of sardines, croaker, and catfish have died off the shores of Paraná, Brazil.

For the second time in less than a month Dead fish washed up on the Bossaso shores in Somalia. The first incident happened in January followed by a second die-off in February. Both incidents happened all along the coast of Puntland.

An estimated 52,000 sea urchins were found dead by divers near Kaumakani Hawaii. Scientists say that the death of these sea urchins should serve as an early warning sign indicating that large-scale changes are happening in our oceans.

March 2012
Hundreds of Dead Dolphins in the Atlantic

The Ohio Division of Wildlife finds 28,613 fish and other aquatic species dead along a three-mile stretch of the Rocky River. The fish included bass, darters, a large variety of minnows, rainbow trout and white suckers.

As many as 3000 Dead dolphins have been found near Peru and around 900 of them have washed up on the Shores of Peru since January 2012.

Norwegian Fisheries are keeping a watchful eye on their fish, as a number of fishing facilities reported a large number of farmed salmon deaths. So far over 550 tons of dead salmon have been found in the last ten days.

May 12, 2012
Thousands of Dead Birds found of the Shores of Chile

Thousands of dead gray petrels, pelicans, gannets and cormorants were found on the beaches of central Chile. Some experts believe that this bird Die-off  may be related to the Peruvian pelican die-off.

Nebraska – 40,000 shovelnose sturgeon, thousands of dead catfish, carp and other fish species dies off in the Lower Platte River.
Illinois –  Biologists in Illinois report Tens of thousands of large- and smallmouth bass and channel catfish die-off.

The Department of Marine Resources has confirmed thousands of dead fish to washed up in the bayous surrounding the Garden Isles community in Bay St Louis.

Tens of thousands of dead fish washed up along a 25 miles stretch of shoreline on Lake Erie.

So why are so many animals mysteriously dying off?

So far, the reaction from the scientific community has been mixed. A number of experts suggest that many of these events are probably natural and say that over reporting is causing unnecessary panic. But when you see reports of millions of dead fish washing up at the same time and then hear the media dismiss thousands of dead birds dropping form the sky as natural phenomenon, it starts to make you a little bit suspicious.

Are we poisoning the planet?

The U.S. Fish and Wildlife service admits that “significant fish and bird kills have resulted from the legal application of pesticides, with millions of fish and birds estimated to die from pesticide exposure each year.”

A study out of Yale University suggests that pesticides have contaminated 90 percent of our major rivers and streams and over one-third of the nation’s aquifers. The pesticide problem is so large that researchers believe it’s responsible for at least three new diseases that have decimated amphibian, honeybee, and — most recently — bat populations around the world.

One of the first large scale die-offs, to be attributed to pesticides, started around 1998 when a huge number of amphibians began to die. Since then over 1,800 species of amphibians have been pushed to the brink of extinction.

While a number of studies are starting to show the connection between pesticide exposure and disease, the government seems to be doing very little to solve the problem. Unless something is done to fix the problem, we might have only seen the very beginning of  something hat could threaten wildlife, our food supply and eventually humankind.