At least 9 people are dead and another 9 have been injured in a mass shooting at Umpqua Community College in Roseburg, Oregon.

Douglas County Commissioner Chris Boice says one shooter is dead; shots were exchanged between the police and the shooter.

“The only information available at this time is:

It is believed there is only one shooter who is no longer a threat.

There is no current threat to the community.

Staff and family are being taken by bus to the Douglas County Fairgrounds to meet family. Emergency personnel are urging the public to avoid the area as it could hamper emergency efforts.

There has been a Joint Information Center established at the Douglas County Sheriff’s Office in Roseburg. Media- please do not call PIO phones at this time as it is only slowing the gathering of information for the upcoming releases. Thank you for the understanding.”

ATF has confirmed that they are on the scene and says canine teams are en route to search for explosives, firearms casings and ammunition.

Authorities check bags as students and staff are moved off campus at Umpqua Community College after shooting report. pic.twitter.com/BvvHh0UYqN

According to a Student who talked to the Local Newspaper, The News-Review, the shooter was asking people to state their religion before he started shooting.

Kortney Moore, 18, from Rogue River, was in her Writing 115 class in Snyder Hall when one shot came through a window. She saw her teacher get shot in the head. The shooter was inside at that point, and he told people to get on the ground. The shooter was asking people to stand up and state their religion and then started firing away, Moore said. Moore was lying there with people who had been shot.

The White House says President Barack Obama has been briefed by his homeland security adviser on the mass shooting, and White House press secretary Josh Earnest said the issue of gun control is high on President Obama’s to-do list. During his daily press briefing Ernest said President Barack Obama is “quite realistic that we’ll need to see a fundamental change in terms of the way the American people communicate this priority to Congress before we’ll see a different outcome in the legislative process.”

“We’ve not yet seen that kind of strong bipartisan support across the country translate into legislative support in the United States Congress that’s sufficient to pass legislation that would, again, implement these kinds of common-sense solutions,” Earnest told reporters.

“Today’s shooting in Roseburg is a heartbreaking tragedy, and my thoughts and prayers are with the victims and their families,” Rep. Peter DeFazio, D-OR, said in a statement. “I want to extend my deepest gratitude to Roseburg’s first responders for their work in responding to the event. Once we know more about what happened today, I plan to work with my colleagues in Congress to find ways to prevent tragedies such as these.”

Another Shooting in a Gun-Free Zone

While the mainstream media and Anti-gun politicians are already jumping on the gun control bandwagon, let me remind people that this shooting happened in a gun-free zone — since 1950 all but two of this country’s mass shootings have taken place in a gun-free zone.

“Possession, use, or threatened use of firearms (including but not limited to BB guns, air guns, water pistols, and paint guns) ammunition, explosives, dangerous chemicals, or any other objects as weapons on college property, except as expressly authorized by law or college regulations, is prohibited.” 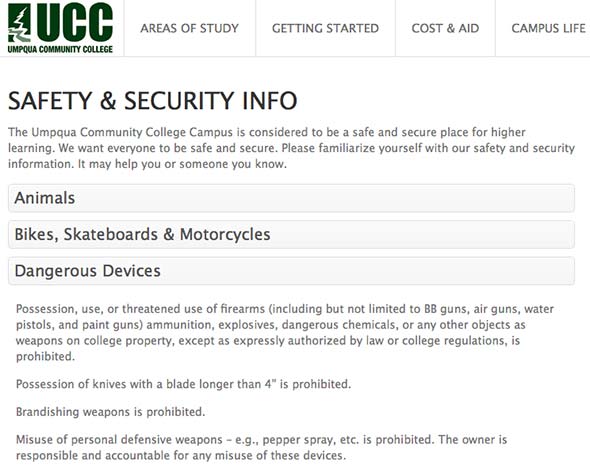 Over the next couple of weeks we are likely to hear President Obama and the rest of the anti-gun politicians blaming guns for this tragedy; unfortunately, you won’t hear anyone talking about how these kids were left defenseless. Politicians never seem to consider their culpability for having taken away the victims basic right to self-defense.

These gun-free zones are incredibly dangerous, and until our politicians admit they are doing far more harm than good, you will continue to see these types of tragedies taking place throughout the country. These psychopaths will continue to target these areas because they know they can get away with their sick demented crimes.

Protecting yourself from Mass Shootings Attacks

Unfortunately, we’ve had to write about this topic far too many times. We live in a sick world where these types of attacks are on the rise. You need to be prepared to deal with these types of events: