If you aren’t following what’s going on over in Europe, you need to start paying attention because what’s happening over there will eventually effect you.

Over the weekend, the political and financial leaders in Europe made moves to confiscate bank accounts in the Mediterranean island nation of Cyprus. The European Union, in league with the bankers, froze bank accounts and are going to steal, yes I said steal, 10% of every bank depositors savings. These are Private banks accounts that are now being raided to bail out European Union Banks.

This Should Be a Huge Wakeup Call to America! 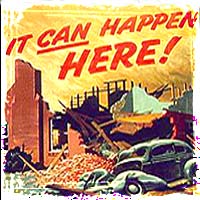 If you don’t have cash at home, or if you have to go to an ATM to withdrawal money, you’re world could literally change on you over night. Just look at what’s happening to the people in Cyprus.

Without a word of warning, the banks have shut down until at least Thursday, and the government is threatening to take at least 10% of every depositor’s money. There STEALING people’s money to bail out the banks; banks where these greedy bastards are getting million dollar bonuses every year, are now taking working men and women’s money to bail out banks that they ran into the ground.

Like we pointed out a couple of weeks ago, the banking system is a very risky proposition. Remember, you can’t count on any of the money you have in the bank; most banks simply don’t have enough cash to deal with a run on the bank. During a collapse situation, your money is probably as good as gone. If you haven’t started, now is the time to prepare for an economic collapse; it could be a lot closer than you think.

Our government has allowed the bankers to run wild and create a system that is built on a facade. Doing business with the banks has become more risky to your financial future than placing every last one of your dollars on Black at a Las Vegas casino.

The system is incredibly vulnerable. If you’re a citizen in Cyprus, you cannot access your money right now. The banks are closed until at least Thursday, and even if they reopen there’s a good chance that most of your money may have been seized by the bankers and the government.

And don’t think this can’t happen here. What’s happening in Cyprus could be a sign of things to come. In fact, back during the 2008 banking crisis, a number of very high level Wall Street insiders were so concerned the system was about to crash that they were pulling out huge amounts of cash and stashing it at home.

Just look at what’s happening throughout Europe. This isn’t just Cyprus; eventually it will have a ripple effect on the rest of the world. In fact, the chaos is already spreading into Italy and Spain, with many fearing those countries could be the next ones to see a run on the banks.

The problems of 2008 never really went away; in fact, most insiders will tell you there even worse today. You need to prepare yourself for the very real possibility of waking up one day, to find you can’t access your money… It’s gone!

Once people see what happened in Cyprus, once they realize these bankers don’t consider your deposits to really be yours, you’re going to see people panicking. Your idiot neighbors, who made fun of people who realized how vulnerable our system is, are going to be the first morons to cause a run on the banks.

These are the people I worry about, the ones who failed to prepare for what’s coming. This is one of the biggest reasons I tell people to avoid large urban population centers. If the system collapses, people are going to be one of the biggest threats to your safety and security.

The financial problems that lead to the housing / financial market crash of 2008 are even worse today than they were in 2008. You can choose to believe the government, just like the people in Cyprus, or you can wake up and start preparing to survive the coming crisis.