We’ve reported on the mysterious animal die-offs on numerous occasions in the past, today we learn about another mysterious die-off, this time on the shores of Lake Erie. 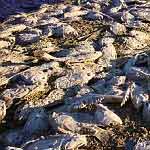 Tens of thousands of dead fish washed up over the last week along a 25 miles stretch of shoreline on Lake Erie. While some officials are blaming the deaths on low oxygen levels, they still can’t explain why dead birds were also found along the shorelines.

Samples of the dead fish, which included sheepshead, catfish, carp, perch and suckers; as well as dead seagulls have all been sent to labs for further analysis.

Earlier this year we compiled a list of some of the mysterious mass animal deaths from around the globe, including 6.7 million dead bats, the death of over 35 percent of the U.S. honeybee population, and millions of dead fish.