Who is the National League of Cities, and why are they trying to take away your right to bear arms? 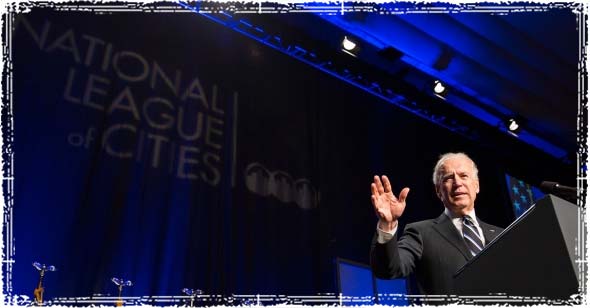 The National League of Cities and their affiliated state Municipal Leagues are both George Soros backed organizations that are aggressively pushing Anti-Gun legislation in localities throughout America. Their President, Tim Ellis, has publicly stated his intent to crackdown on guns, and believes that there is an epidemic of children who are “dying from gun violence due to the lack of gun control.”

Through their Public Safety and Crime Prevention committee, one of the NLC’s stated goals is to increase gun control efforts on city, state, and federal levels. The NLC represents over 19,000 cities, towns, and villages and is actively producing policy agenda for local governments throughout the U.S. They also routinely meet with and lobby members of Congress, and the President.

The NLC has a long history of helping politicians ban guns throughout the U.S., including being the primary group who wrote and aggressively lobbied for the passage of HR 4296.   HR4296 was the legislation that helped President Clinton ban a large number of semi-automatic weapons. Since then, the group has shifted their focus towards banning guns on a local level.

In a bulletin from the NLC’s Action Kit for Municipal Leaders titled, “Restricting Access to Guns” they state:

At least 30 states do not allow communities to impose their own restrictions on gun purchases or ownership. Five states (California, Connecticut, Hawaii, Illinois, and Massachusetts) specifically grant local governments the right to enact gun control laws. In four other states (Indiana, Tennessee, Virginia, and Washington), cities have some discretion in crafting local gun control ordinances. In states that do allow local gun control, many municipalities have taken positive steps to restrict gun access. For example, local governments in California’s East Bay area had enacted nearly 50 local gun ordinances by late 1998 either to restrict the sale of “Saturday Night Specials” and other “junk guns” or to impose zoning restrictions regulating home-based gun sales.

Even in states that prohibit local governments from passing laws to regulate the purchase or licensing of firearms, cities have found creative ways to restrict the availability of guns.

The NLC has already helped enact a number of extremely repressive gun-control measures throughout the country. In fact, they recently helped South Dakota use tax payer dollars to push for firearms bans in city parks, libraries, transit buses, and a number of other public places. They are also in the process of pushing for city-level gun bans in New Hampshire, Pennsylvania, Illinois, Connecticut, Delaware, North Carolina and Virginia.

These people are so Anti-Gun that they would rather see law-abiding citizens become victims of crime than allow them to legally own a gun.

But it’s not just Self-Defense Weapons that they’re trying to ban. In fact, Kenneth Massey, who heads the NLC’s Public Safety & Crime Prevention Committee, recently started targeting hunters. In his home city of Farmington, Michigan, Massey is pushing for a law that would ban all forms of hunting in his city. He’s so against people being armed, that the legislation he’s proposing actually classifies arrows being shot from a bow, as the discharge of a firearm.