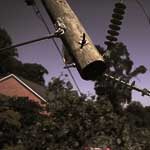 Ripping through the Mid-Alantic region at speeds over 60 mph, the massive Super Derecho thunderstorms that formed west of Chicago, left a trail of destruction that spanned from Northern Illinois all the way to the Atlantic Ocean.

The fast moving storm, which caused widespread blackouts throughout the country, has some people wondering how prepared our country is to face any type of disaster.

From the complete failure of the 911 system in Northern Virginia, to the millions of people who are still without power four days after the storm, a number of troubling question were raised as to how prepared our nation is to deal with a large scale disaster or attack. 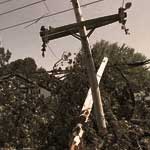 The Economic Collapse Blog posed the question, If One Storm Can Turn D.C. Dark for Several Days, What Would a Massive EMP Burst Do? I think this question, along with a number of other issues that were raised, should be a serious cause for concern.

If our nation’s capital can go dark for four days from a storm, how prepared is the country to respond to a large scale disaster or attack?

The answer to that question is probably scarier than most people realize. In my opinion, our nation is dreadfully unprepared to deal with even small scale disasters, let alone a major attack.  With the huge number of technical advancements we’ve made over the last 50 years, is there really any excuse for 5 million people to lose power because of a storm?

Government Only Part of the Problem

While I could go on the listing government preparedness failures for days, the fact is the general public is not much better at being prepared. In fact, it’s estimated that somewhere around 90% of the public has little to no emergency preparedness training or supplies.

When the general public can’t even take the subject of emergency preparedness seriously, how much can we really blame the government? In my opinion, there is a personal responsibility component that cannot be ignored. We live in a society where most people are completely unable and unprepared to care for themselves in a major disaster. I hope this storm serves as a wake up call for those who are unprepared, but sadly just like every other natural disaster before this, I fear this to will be forgotten.