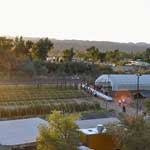 In the most recent display of a government that has spiraled out of control, a group of Nevada Organic Farm Supporters were forced to destroy their organic food after coming together for a picnic at the Quail Hollow Farm.

When local supporters of the farm came together for a “Farm to Fork” picnic, their day quickly turned into a possible criminal offense when the Southern Nevada Health District showed up to shut it down. Apparently feeding your friends and family local organic farm raised food is now illegal in Nevada.

The Southern Nevada Health Department officials threatened guests with police action if the organizers didn’t destroy all of the food.  The farmers were forced to destroy the prepared meats and vegetables, and were even forced to pour bleach on the food so they wouldn’t be able to feed it to their pigs. According to guests, it was the only way they would be allowed to continue their party.

According to the Health district, any meat that is not USDA certified or provided by a government approved source is now illegal to eat. They also informed the farmers that for some reason their vegetables were now considered a Bio-Hazard and had to be disposed of as well.

Check out the Video from the event: