This morning the New York City Department of Health conducted a large-scale medical emergency preparedness drill simulating a massive public health emergency, causing many to wonder if they are preparing for Ebola in America. 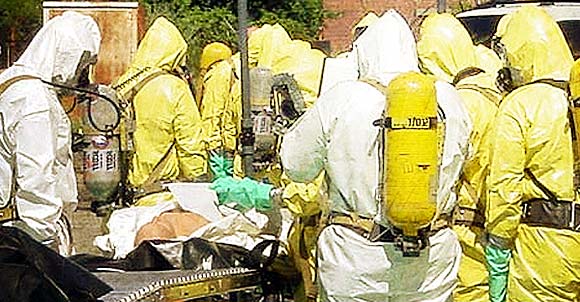 In the largest surprise drill in the city’s history, the NYC health department gave little notice to participants, with most city agencies completely unaware of the drill until it started this morning at 6:30 a.m. The drill included over 1,500 New York City workers from more than a dozen agencies including the New York Police Department and the New York Fire Department.

30 locations were setup throughout the city, in which first responders simulated a large-scale bio-terror attack or medical outbreak. Participants setup emergency stations and distribution centers where they could quickly distribute medication and supplies to infected areas.

“This exercise demonstrates our commitment to ensuring we have the capability and resources to protect the health and safety of all New Yorkers in times of crisis,” stated Dr. Oxiris Barbot, First Deputy Commissioner of the Health Department.

“There are over 8 million New Yorkers, 55 million tourists and over 5 million commuters that visit this city,” stated Police Commissioner Bill Bratton. “This exercise will provide an opportunity to work closely with our emergency response partners to develop a safety plan that includes dispensing the proper medication in the event of a terrorist attack or public health emergency.”

Called RAMPEx, which stands for Rapid Activation for Mass Prophylaxis Exercise, the drill’s results or exact purpose will not be publicized due to what the city is calling “security concerns.” The drill was estimated to cost the city $1.4 million.