For the second night in a row, the city of New York has been plagued by looting. 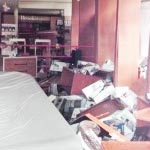 Business owners throughout New York woke this morning to find one more challenge facing them in the wake of Hurricane Sandy; this time one caused by their fellow New Yorkers.

Homes and businesses throughout the city were hit by looters, many of whom took to social media to plan their criminal activities. From a number of pharmacies in Coney Island who lost their entire inventory of pharmaceuticals to small businesses who were already struggling to recover from the storm, looters are targeting the most vulnerable areas of New York; those areas that were evacuated and have been left largely unprotected.

With millions of dollars of merchandise sitting in unprotected businesses, the lowlives have come out to take advantage of an already desperate situation. The New York Post is reporting that police arrested over a dozen looters last night in the Rockaways and Coney Island.

As soon as the waters started receding, looters took to the streets smashing out windows and stealing everything in sight. There were also a number of reports of criminals dressed as Con Ed workers who were robbing New Yorkers at gun point.

Police are now warning residents to be on the lookout for criminals who are going door to door pretending to be utility workers.