President Obama has just issued an executive order calling up National Guard reserves to deal with Ebola in Africa. Obama notified Congress of his Executive order Thursday. The order calls the “Selected Reserve and Certain individual ready reserve members of the Armed forces to Active duty.”

“I hereby determine that it is necessary to augment the active Armed Forces of the United States for the effective conduct of Operation United Assistance, which is providing support to civilian-led humanitarian assistance and consequence management support related to the Ebola virus disease outbreak in West Africa.”

Here is the Executive order directly from the White House website: 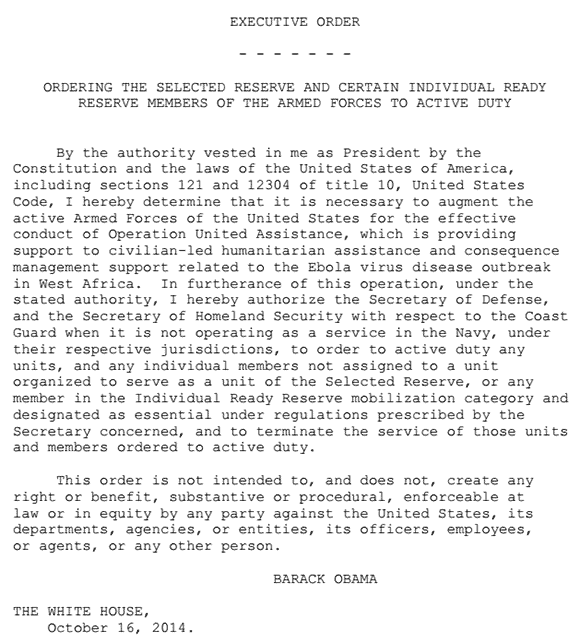 The White House also expanded on its justification for not instituting an immediate travel ban from infected countries.

“It would provide a direct incentive for individuals seeking to travel to the United States to go underground and to seek to evade this screening and to not be candid about their travel history in order to enter the country,” said White House Press Secretary Josh Earnest.

The same President who refuses to send our military to fight terrorists, who have threatened our country, is more than willing to send them into harm’s way to fight a virus that they have no experience fighting.

There are currently more than 500 U.S. troops in the region, and the Obama administration has already authorized the deployment of up to 4,000 more to assist in fighting the virus.

Obama Refuses to Stop Infected West Africans from entering the U.S., but will Quarantine Military upon Return.

As the administration continues their insane policy of allowing West Africans to board planes to the United States, the Defense Department announced that all returning troops from the hot zone will be quarantined for 21 days at a Defense Department facility.

Earlier this week, Radio Talk show host Michael Savage, who has a PhD. from the University of California at Berkeley in epidemiology and nutrition sciences, slammed the administration for sending our troops into the hot zone.

On his show Savage said, “There’s not a sane reason to take 4,000 troops and send them into a hot Ebola zone without expecting at least one of them to come back with Ebola, unless you want to infect the nation with Ebola.” He went on to say, “U.S. government is violating the primary rule of epidemiology by exposing our young men and women to this deadly virus.”

Although many in the media slammed Savage for his comments, ABC News medical expert Richard Besser told This Week Sunday morning that there was a “very real” possibility one of the U.S. troops being sent to West Africa will contract the virus.

Troops will be in direct contact with Ebola Patients Blood.

According to a Fox News report from last week, a small group of military medical technicians will have to handle infected blood samples, which Pentagon officials acknowledged could put them at risk of becoming infected.

Pentagon officials insist these medical teams will be the only individuals who will be intentionally handling raw materials that could be infected, but they have not said whether these technicians will be quarantined away from other military teams in the area.

Gen. David Rodriguez, the head of U.S. Africa Command, told Pentagon reporters, “Those people are trained to the very highest level of operating in a nuclear, biological, and chemical arena, and they are tested continually.”

21 Day Quarantine may not be enough to Contain the Virus

All of this comes as a new Drexel study, published in the journal PLOS One, suggests 21 days might not be a long enough quarantine period for those who have been exposed to the Ebola virus.

The research, which was conducted by Professor Charles Haas, PhD, and used data from both previous outbreaks and the first nine months of the current outbreak, claims that there’s a .1 to 12% risk of a quarantined person developing the virus if they are released after 21 days.

Another study, conducted by the World health Organization, showed that 3% of Ebola incubations occurred in the period of 21 – 42 days after exposure.

With so many unanswered questions about this virus, and after seeing the complete breakdown of our emergency preparedness agencies and hospitals, it is beyond negligent to continue to allow people from the infected areas in West Africa into this country. Since our government is unwilling, and I believe unable to protect the public from danger, I hope people learn from this experience and take steps to protect themselves for future troubles.