The Obama administration is in the middle negotiating a Small Arms Treaty with the U.N. that would effectively place a global ban on the import and export of small firearms.

This ban would affect all private gun owners and will be used to implement an international gun registry of all guns and ammo.

Despite the fact that Americans overwhelmingly oppose the idea of banning firearms, this administration seems hell-bent on limiting your access to guns.  From the politician who admitted that he would rather see people become victims of crime than allow them to own a gun, to this administrations work with The National League of Cities to ban guns in cities and townships throughout America, there is no doubt that our right to bear arms is under attack. 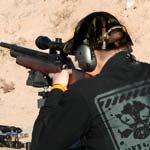 The future of the 2nd Amendment is in serious jeopardy. Every gun owner in America needs to wake up, our right to keep and bear arms is about to be put into the hands of the U.N. who will severely limit your ability to own any rifles, shotguns and handguns.

A conference is being held in July 2012 in New York to draft the final language of the treaty. Hillary Clinton and the Obama administration have already signed on to support the U.N. Arms Trade Treaty.

U.S. Sen. Jerry Moran (R-Kans.) and 57 other senators sent a letter to President Obama and Secretary of State Hillary Clinton warning them that they do not have legal authority to sign any treaty that would affect an Americans right to own firearms.

This week, Sen. Moran spoke on the Senate floor about S. 2205, saying:

“More than two centuries ago, our founding fathers wisely amended the United States Constitution to guarantee a Bill of Rights for its citizens. Since then, our democracy has stood strong as Americans have enjoyed liberties unparalleled in the world – including the fundamental right to keep and bear arms.”

“Today, our freedoms and our country’s sovereignty are in danger of being undermined by the United Nations. To ensure our liberties remain for our generation and future generations, I am offering legislation to protect the rights of American gun owners from the effects of a U.N. arms treaty.”

“In the days ahead, I will continue to work with my colleagues to ensure an Arms Trade Treaty that undermines the Constitutional rights of American gun owners is dead on arrival in the Senate.”

Here is the Full Speech: