Shortly after we reported on the U.S. governments program to spy on Americans through the cellphone carriers, another bombshell dropped. This time an  intelligence officer with the NSA leaked documents that showed the NSA and the Federal government had direct access to every major internet company in the world, and they were actively collecting data on everything that is done online.

The documents highlighted a classified program, code-named PRISM, which had not been made public until now. PRISM  taps directly into the central servers of at least the top nine U.S. Internet companies, including Microsoft, Yahoo, Google, Facebook, PalTalk, AOL, Skype, YouTube, and Apple. The Program allows the NSA and the FBI to access every Americans audio and video chats, photographs, e-mails, documents, and internet connection logs.

One of the scariest parts of this program is what a career intelligence officer, the person who the Washington Post claims sent them materials related to the Prism program, said about the NSA’s capabilities. He told the Post, “They quite literally can watch your ideas form as you type.”

History of the PRISM Program

PRISM was launched during the last month of the Bush administration, but it’s the Obama administration who really took this program to the next level, when they added 8 of the 9 internet giants to the program. Since Obama came to office, the NSA has managed to make deals that give them direct access into every major server in Silicon Valley.

While everyone of the companies has denied being part of the PRISM program, the documents tell an entirely different story. According to the leaked documents, the PRISM Program started with Microsoft, who joined the information-sharing program in December of 2007.

Shortly after the Obama administration came to power, Yahoo came onboard in 2008. It was followed by Google, Facebook and PalTalk in 2009; YouTube in 2010; Skype and AOL in 2011; and Apple, which joined the program in 2012. The program is continuing to grow, and is expected to bring on even more providers this year.

What Exactly are they collecting?

In one word; EVERYTHING! The size of this program is almost unbelievable. From email, video and voice chats to photos, file transfers, social networking details and even personal financial information, the amount of information being collected is mind-boggling.

The program literally allows the NSA direct access to the servers of every one of these companies. It then allows them to obtain both stored communications as well as perform real-time collection on targeted users.

The Constitution of the United States has Been Shredded

Without a warrant, without a court order, and even without any suspicion of wrongdoing the federal government is now tracking every single internet user in the United States. Everything you do, say or type online, through one of these major internet channels, is now being funneled directly into the FBI and NSA’s databases.

President Barack Obama, is a speech earlier this morning, forcefully defended both NSA spy programs. He then tried to lay the blame on previous administrations, despite the fact that he has overseen the program for the last five years. 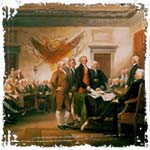 Really? Because I’m pretty sure our country already had this debate back in 1776; and I think we resolved it on September 17, 1787 when we adopted something called The Constitution of the United States. One would think a so-called Constitutional scholar would realize the debate is over; our 4th amendment rights are supposed to protect us from this gross invasion of privacy.

There is no debate; this is a 100% violation of every single American’s Constitutional Rights.