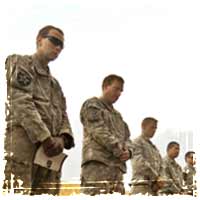 The Pentagon has confirmed that they will now be prosecuting military members who share their Christian Faith. The statement, which was released to Fox News, is unprecedented and means that even Military Chaplain, who are there for the specific purpose of helping those of faith, will no longer be able to share their religious views with anyone in the military.

The move comes after the Obama Administration allowed one of the most fanatical atheists in America to develop court-martial procedures that will punish Christians in the military who express or share their faith in Jesus Christ.

Mikey Weinstein, President of the Military Religious Freedom Foundation, was brought in by the Obama administration to come up with procedures that will be used to literally persecute those who share the gospel of Jesus Christ.

Those who are found guilty could be imprisoned or dishonorably discharged from the military. Military Chaplain, who have spiritually counseled members of the military since the founding of the U.S. military under George Washington, will now be barred from ministering to the spiritual needs of even active military troops who are giving their lives in the field of battle.

Weinstein, who talked to Fox News, stated “Someone needs to be punished for this, until the Air Force or Army or Navy or Marine Corps punishes a member of the military for unconstitutional religious proselytizing and oppression, we will never have the ability to stop this horrible, horrendous, dehumanizing behavior.” He’s also said U.S. troops who proselytize are guilty of sedition and treason and are and of committing an act of “spiritual rape.”

What amazes me is the fact that the Obama administration has refused to persecute the Fort Hood Terrorist that killed 13 people and injured over 30 people under the same religious laws. This is a man who in the name of religious jihad, went on a shooting rampage that the Pentagon has classified an “Act of Workplace Violence.” Three years later he has yet to stand trial, and has even received a religious waiver so he could keep his Islamic beard in the name of religious freedom, all despite the fact that it’s a direct violation of the uniform military code.