What is a National Emergency?

The National Emergencies Act, which was first enacted in 1976, was written to make sure that the President of the United States would have various powers during times of emergency. The Act also set strict timelines to prevent any one president from using these powers for an indefinite amount of time.

With his numerous declarations, President Obama set a disturbing trend that was started by President Bush right after the September 11th attacks. On September 14, 2001, President Bush enacted a National State of Emergency. Since that date both President Bush and Obama have managed to extend their power year after year by declaring various states of emergency.

A couple of months back we highlighted a number of questionable Executive Orders that some people speculated were preparing this country for Martial Law. While some in the mainstream media would like you to believe that these are just conspiracy theories, created by crackpots hiding in their mothers basements, it seems some lawmakers can now be added to that crowd.

Congress Woman Kay Granger of Texas issued a Press Release warning of the Presidents unprecedented power grab. In the letter she warned that President Obama and the Federal government had passed an Executive Order giving them the power to take over all the fundamental parts of our economy – in the name of national security – in times of national emergency.

She goes on to warn:

This means all of our water resources, construction services and materials (steel, concrete, etc.), our civil transportation system, food and health resources, our energy supplies including oil and natural gas – even farm equipment – can be taken over by the President and his cabinet secretaries.  The Government can also draft U.S. citizens into the military and force U.S. citizens to fulfill “labor requirements” for the purposes of “national defense.”  There is not even any Congressional oversight, only briefings are required.

It is still unclear why this order was signed now, and what the consequences are for our nation – especially during times of peace.  This type of Martial Law imposes a government takeover on U.S. citizens that is typically reserved for national emergencies, not in a time of relative peace. 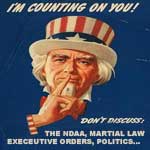 From the NDAA that gave the President the power to indefinitely detain American Citizens to the huge urban warfare drills in Chicago, Miami, Los Angeles , and Tampa; The United States is starting to look more and more like we are actually in the middle of a national emergency. Altogether, Clinton declared 17 national emergencies, Bush, 13, and Obama, 12, according to a list compiled by the Brennan Center .

These unchecked powers will some day come back to haunt us.

Even if this President never abuses these powers, the very fact that they have been enacted sets a dangerous trend that will ultimately lead to a country that looks nothing like what our founders intended. No one man or office should ever have unlimited authority over the people. Whether you agree with the person in office or not, this much power in one person’s hands is not a very comforting thought.