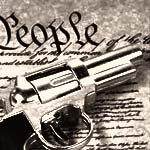 It seems the Obama administration is keeping its word on using the Department of Justice to restrict the rights of gun owners in America.

The Washington Times is reporting that the Department of Justice (DOJ) has just given the Bureau of Alcohol, Tobacco, Firearms, and Explosives (ATF) new powers that will make it easier for the ATF to seize American citizens guns without due process of law.

According to our laws, American citizens must be convicted or charged with a crime before the government can seize their firearms. Under these new Obama Administration rules, Due Process just got thrown right out the window.

The ATF has been given the authority to “seize and administratively forfeit property involved in controlled substance abuses.” This means that anyone suspected of substance abuse can now have their firearms seized without even being arrested.

According to the Times, this gives the federal government the power to seize the guns of citizens, even if they are merely suspected of substance abuse. These citizens do not have to be officially charged or arrested. Hell they don’t even have to be guilty.

Under these new rules, you are effectively deemed guilty by default, and will likely never see your property without engaging in a long and costly legal battle with the federal government. For those that think this power won’t be abused, just look at how Tennessee is abusing a similar law and seizing paper currency from people who have never been charged with a crime.