So apparently the mainstream media isn’t the only one censoring anyone critical of Islam, it looks like after posting today’s story over the terrorist attacks in Paris  – which included a picture of Mohammed – we have been banned from commenting on our own Facebook page, a page which has almost 350,000 followers.

As of now the actual Facebook fan page is still up; but for the last three hours we have been blocked from commenting on our own page, after I posted the story below. 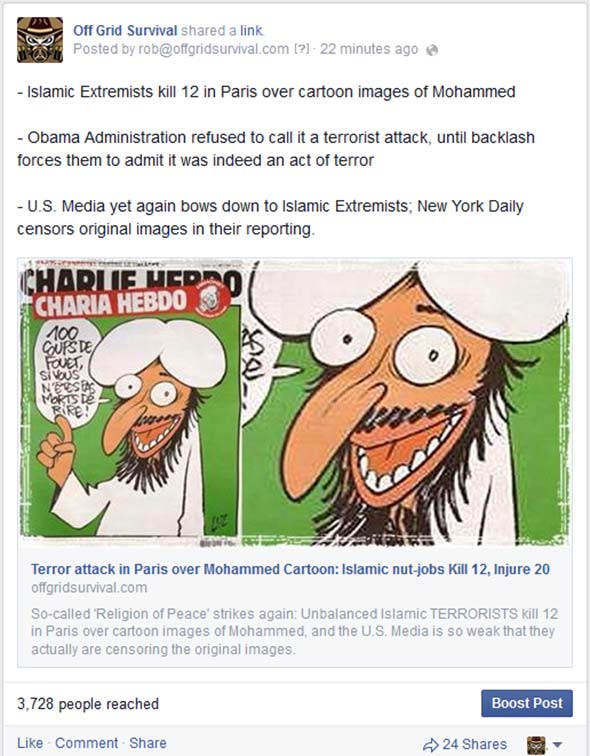 And here is what happened almost immediately when I tried to start commenting back to people who were posting on the page (in this case, to one of those oh so friendly liberals who love to get people banned from social media sites):

What I suspect happened:

This is a popular tactic used by deranged liberal groups who target anyone with an opposing view. Over the last couple of years these groups have been very successful at silencing anyone they disagree with, by reporting everything as “hate-speech.” I suspect that I will eventually be allowed to post on Facebook, but the fact that this is happening should be a wake-up call to those who use these sites.

When you have almost 350,000 followers on Facebook, and Facebook decides it’s only going to show your post to 1% of those followers, I think we have a problem!

I’ve written about this in the past, and after witnessing a whole slew of conservative bloggers being banned from sites like Twitter and Facebook over the last couple of years, it’s become pretty obvious that these sites are 100% designed to control what you see.

FIGHT BACK using their own technology against them. Sometimes the best way to fight the war is from within the enemy’s camp. Use Facebook, Twitter and every other social media channel you can to share these types of stories and fight back. Don’t be intimidating into censoring yourself. If we’re ever able to post to our account again, I don’t plan on doing anything different.


Share and Promote independent media. The Corporate bigwigs have all the money in the world to promote their propaganda. The only way we can fight back is to start setting up our own networks and promoting each other.