The federal government has sealed off the Malheur National Wildlife Refuge in Oregon, after last nights deadly confrontation with Ammon Bundy and other militia members. Late last night, the F.B.I. shot and killed one of the protesters,  Robert ‘LaVoy’ Finicum, and took seven others into custody. 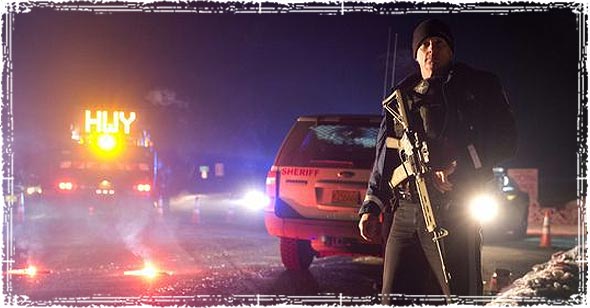 Hours after Ammon Bundy was arrested in the deadly encounter with the federal government, additional protesters took control of the Oregon wildlife refuge at the center of a weeks-long standoff. This morning at a press conference the feds signaled that time may be running out.

Earlier this month Bundy told media that he and two of his brothers were among a group of dozens of militia occupying the headquarters of the Malheur National Wildlife Refuge. Ammon Bundy said the group planned to stay at the refuge indefinitely. “We’re planning on staying here for years, absolutely,” Ammon Bundy said. “This is not a decision we’ve made at the last minute.”

The Bundy Family came to Oregon to protest the arrest and attempted land seizure of an Oregon Ranching family that was being targeted by the federal government.

Why Would the Feds Attempt to Turn this into a Deadly Situation?

Think about it; was the F.B.I. called in to arrest or shoot the liberal Occupy Wall Street people who did much more than just assemble at a wildlife refuge? Did the F.B.I get sent in to arrest the armed criminals who burnt their own neighborhoods in Baltimore and Ferguson to the ground last summer?

No matter how you feel about the Bundy family, or the militia who is peacefully assembling at the wildlife refuge in Oregon, keep in mind that nothing they are doing is harming anyone. The Refuge is in the middle of nowhere, and the F.B.I. could have easily just waited them out. This after all is public land; land we pay for with our tax dollars. There was NO THREAT to public safety, and there was no reason to try to start a gun fight.

Earlier in the day, Jason Patrick, one of the leaders of the militia remaining at the outpost, said he could see an armored convoy and a number of law enforcement officers gathered from his perch in the compound.

“Right now, we’re doing fine,” Patrick said. “We’re just trying to figure out how a dead cowboy equals a peaceful resolution.” Patrick’s comments could have been aimed at Oregon Gov. Kate Brown who asked for “patience as officials continue pursuit of a swift and peaceful resolution.”