California officials have extended evacuations below Oroville Dam and say it could be some time before they allow residents back into their homes.

Over 180,000 people were told to evacuate areas downstream from the Oroville Dam in Northern California on Sunday because officials fear the Dam’s emergency Spillway could fail, sending a 30-foot-tall wall of water downstream.

“I recognize and absolutely appreciate the frustration people who were evacuated must feel,” Honea said at a press conference. “It wasn’t a decision I made lightly.”

He told reporters that there is no timeline for lifting the evacuation order, as officials scramble to reinforce the emergency spillway.

Officials are desperately attempting to lower the lake another 50 feet to less than 850 feet elevation to allow room in the lake for the upcoming storm, projected to arrive Thursday. At the same time, crews are attempting to repair the damaged emergency spillway before the next storm moves in.

Efforts are underway to make repairs to both the primary and auxiliary spillways at Lake Oroville. pic.twitter.com/1Pd4r5Aamz

Oroville Dam-area evacuees might not get to return home until spillway is repaired, sheriff says https://t.co/1bEirRWiwz pic.twitter.com/1vfGpt47nR

While the California State government scrambles to make excuses, court documents suggest they knew the dam had major problems as far back as 2002.

In a technical memo on Lake Oroville’s discharge, the Yuba County Water Agency wrote in 2002 that if the Department of Water Resources used the emergency spillway, “extensive erosion would take place” and that “the spillway road and possibly high voltage transmission towers would be impacted,” according to a motion to intervene on the licensing filed by environmentalist groups in 2005.

“Because the area downstream from the emergency spillway crest is an unlined hillside, significant erosion of the hillside would occur,” the document said.

Ron Stork, policy director with Friends of the River, said California officials were told to reinforce the spillway.

“We urged them to put concrete on the spillway — our argument was that without a proper spillway, the hillside would wash away and cause catastrophic flooding,” Stork said.

“Any spillway — primary or emergency — usually has some kind of protection, a concrete basin,” said Tullis. “For structures as big as this, it seems pretty uncommon to not have some protection at the base of the spillway.”

On Monday, Bill Croyle, acting head of the Department of Water Resources, refused to comment on the technical memo, saying he was not familiar with the warnings and would need to research the matter before commenting. 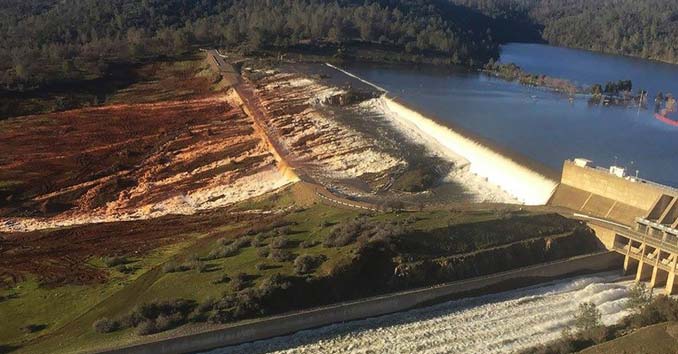 According to the Sacramento Bee, Engineers have known for decades that if water ever spilled onto Lake Oroville’s unpaved auxiliary spillway it could compromise the earthen structure.

The ungated auxiliary spillway was added to handle a flood so big that “no one could imagine it,” said Joe Countryman, a former engineer with the U.S. Army Corps of Engineers. As a result, he said, California and the water contractors “didn’t want to put a lot of extra resources” into lining that spillway, which is basically an earthen hillside.

Congressional representatives said Monday they were stunned to learn that Oroville did not have a backup spillway paved with concrete that could be safely used if the main one was damaged.

“The emergency spillway remained basically a dirt, soil rock facility, and it worked fine until it had to be used, in which case it didn’t work so well,” said U.S. Rep. John Garamendi, D-Walnut Grove.

“When I think about the fact that the (auxiliary) spillway at Oroville did not even have concrete lining on it, I’m just really surprised,” said Rep. Doris Matsui, a Democrat from Sacramento. “I would think that would be the first thing you could do.”

“Some hard questions have to be answered about why this facility was apparently neglected in a way that left it vulnerable to these problems,” said Rep. Jared Huffman of San Rafael, the top Democrat on the House subcommittee with oversight over dams. “Clearly there were warning signs, there were people saying, ‘we need to fix this.’ ”

You can’t trust these people with your life!

The disaster also highlights how ill-prepared local government officials were to face the crisis, despite knowing this was a possibility after a gaping hole appeared in the dam’s main spillway last week. 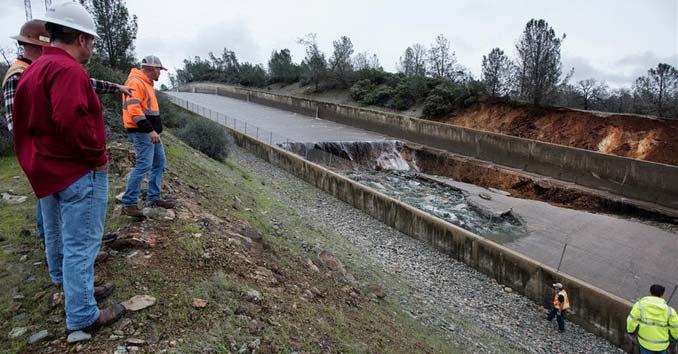 Though the dam itself remains intact, officials anticipated a failure of the emergency auxiliary spillway at Oroville Dam within 60 minutes of the original notice, which was issued at 4:11 p.m. on Sunday. Officials feared erosion damage to the emergency spillway could cause the spillway to fail, unleashing an uncontrolled torrent of floodwaters.

Had the spillway actually failed, tens of thousands of people could have been killed because the government waited until the last possible moment to issue an evacuation notice.

Residents downstream from the Dam really dodged a bullet last night. With only 60 minutes notice before officials believed the spillway could collapse, over 100,000 people took to the roads in a panicked frenzy to get to higher ground. Gas stations throughout the area were overwhelmed with people trying to get enough gas to make it out of town, and most sat in traffic for over 6 hours to drive around 50 miles.

Remnants from the evacuation: along main routes out of Oroville danger zone are multiple abandoned, damaged vehicles pic.twitter.com/48hiNIBr3T

Shelters throughout the area were also quickly overwhelmed with people who had nowhere else to go.

Do you have a plan?

If you wait for the government to issue an evacuation notice, it’s probably going to be too late. The last thing you need during an emergency situation is to get caught up in the chaos of the evacuation.

Some Important things you need to keep in mind: