As the media goes into overdrive attempting to divide the country, radical leftists, in league with Islamic terror groups, have begun organizing against the working class citizens of this country.

Over the last couple weeks, the mainstream media (the real fake news) has been feverishly covering up numerous violent attacks on Trump supporters, while at the same time pushing a phony protest movement that is increasingly turning violent and attracting some of the most radical groups in the world.

Over the weekend, at one of the phony airport protests, radical leftists started attacking a Trump supporter, violently beating him and knocking him unconscious. This was all done at Portland Airport, where the loony local government allowed wackjobs to invade the airport and put innocent lives at risk.

‼️ #USA: protesters beaten an innocent citizen at #Portland Airport unconscious, because he has voted for President #Trump. It begins… pic.twitter.com/n4DTn7lmDw

You probably didn’t see that video on FOX, MSNBC, or CNN, who were all too busy demonizing the Trump administration for attempting to keep Radical Islamic terrorists out of our country – what a concept!

On Friday, Donald Trump signed an executive order to refuse refugees from seven terrorist states. Within hours, radical left-wing groups invaded airports throughout the country. The mainstream media attempted to spread the lie that these protests were “organic,” while conveniently leaving out the fact that they were organized by radical left-wing groups and terror organizations connected to the Muslim Brotherhood.

In the screenshot below, taken during live coverage of one of the so-called protests, you can clearly see members of EADHR leading protesters at the Dallas Airport. 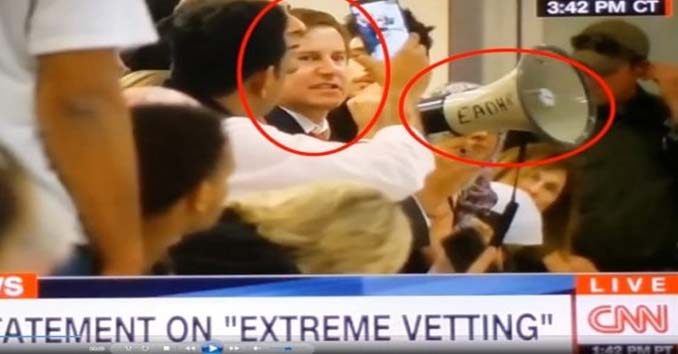 Egyptian Americans for Democracy and Human Rights (EADHR) is a radical group sympathetic to the Muslim Brotherhood.

In another attack that went unreported by the mainstream media, two radical left-wingers attempted to set a trump supporters hair on fire at one of the “women’s rights” marches last week in Washington D.C.

Funny how they are protesting for women’s rights, while at the same time attempting to start a “woman” on fire.


This is at the same rally where idiot celebrities like Madonna talked about blowing up the White House.

Oh, and here is another interesting little fact that the mainstream media failed to mention about those so-called organic women’s rights marches that just sprang up throughout the country, they weren’t exactly organic.

They were actually organized by ISIS supporters — you know, the group that routinely stones women to death for things like speaking, driving a car, and not covering their face with a burka.

Oh come on, that’s got to be fake news, right? Wrong!

Here is a picture of Linda Sansour, the woman who supposedly started the movement by posting a post on Facebook that just happened to spark these “organic” protests. Yep, that’s here throwing up the ISIS Sign, showing her solidarity to the terrorist organization. 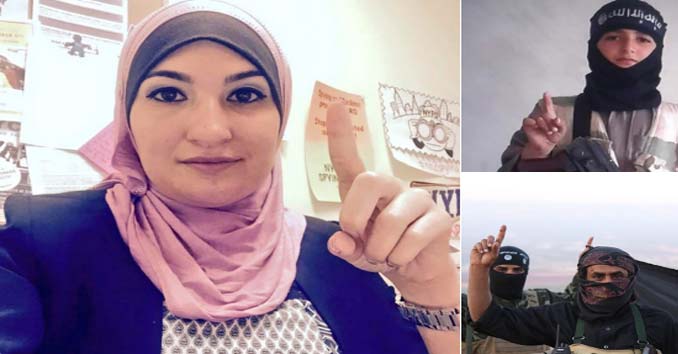 Linda Sansour is a Pro-Palestine Muslim activist and has ties to numerous terrorist organizations including Hamas, as the Daily Caller reports.

Linda Sarsour, one of the organizers behind Saturday’s Women’s March, being held in Washington, D.C., was recently spotted at a large Muslim convention in Chicago posing for pictures with an accused financier for Hamas, the terrorist group.

Sarsour, the head of the Arab American Association of New York and an Obama White House “Champion of Change,” was speaking at last month’s 15th annual convention of the Muslim American Society and Islamic Circle of North America.

While there, she posed for a picture with Salah Sarsour, a member of the Islamic Society of Milwaukee and former Hamas operative who was jailed in Israel in the 1990s because of his alleged work for the terrorist group.

These are the people leading these so-called peaceful protests: Anti-American Radicals and Terrorists.

And then you have the daily freakout from Hollywood celebrities, who are openly encouraging revolution and attacks on anyone who disagrees with their radical views. Here is one wacko calling for attacks on Trump Supporters during his speech at some idiotic Hollywood award show.

guy from stranger things: absolutely punch some nazis in the face pic.twitter.com/X5SikBgecJ

So what does this all have to do with Preparedness?

We are living in a time where radical activists and terrorist organizations are being given credibility by the mainstream media, Hollywood, Silicon Valley, the Democrat party, and even by some traitorous Republicans like John McCain and Lindsey Graham.

These groups are planning to create chaos, and they have no problem using violence to get what they want. As we have seen now for the last couple of years, these violent mobs are starting to target innocent people throughout the country. You need to be prepared for these events, and you need to be ready to protect yourself and your family.

When the authorities allow them to take over airports throughout the country, one thing is very clear — WE NEED TO BE READY!

Situational Awareness: This is where your preparedness really begins; after all, if you can’t spot the problem, then all of your other efforts are in vain.