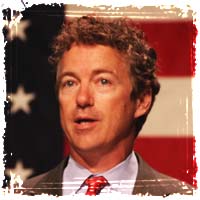 Earlier this week Senator Rand Paul sent his third and final letter to John Brennan, President Obama’s Death Czar / CIA Nominee. In the letter, Paul demanded answers on the Presidents secret use of Drones in the targeted killing of American Citizens.

Rand Paul, who has sent three letters to Brennan and demanded answers from the administration on numerous occasions, wants to know why nobody in the Obama administration will publicly say that they will not target American citizens on American soil. In the letter he asks, “The question that I and many others have asked is not whether the Administration has or intends to carry out drone strikes inside the United States, but whether it believes it has the authority to do so. This is an important distinction that should not be ignored.”

Shockingly, not one person in the Obama administration has answered this question. In fact, as we reported last year after Attorney General Eric Holder made the case for killing American citizens overseas, FBI Director Robert Mueller was asked if that applied to Americans on U.S. soil; he responded by telling Congress “he was not certain” if the government had the right to kill its own people.

While some may dismiss Yesterday’s Comments by Sarah Palin, where she said the Feds were stockpiling bullets to use on American citizens, the administration’s refusal to address Rand Paul’s question makes her comments that much more important. Why are the Feds stockpiling massive amounts of ammunition, and why does the Obama administration refuse to answer Senator Paul’s questions? It seems like a pretty easy thing to answer, either they are willing to violate the laws of the land and kill American Citizens, or they’re not.

Rand Paul’s letter can be read below:

In consideration of your nomination to be Director of the Central Intelligence Agency (CIA), I have repeatedly requested that you provide answers to several questions clarifying your role in the approval of lethal force against terrorism suspects, particularly those who are U.S. citizens. Your past actions in this regard, as well as your view of the limitations to which you are subject, are of critical importance in assessing your qualifications to lead the CIA. If it is not clear that you will honor the limits placed upon the Executive Branch by the Constitution, then the Senate should not confirm you to lead the CIA.

During your confirmation process in the Senate Select Committee on Intelligence (SSCI), committee members have quite appropriately made requests similar to questions I raised in my previous letter to you-that you expound on your views on the limits of executive power in using lethal force against U.S. citizens, especially when operating on U.S. soil. In fact, the Chairman of the SSCI, Sen. Feinstein, specifically asked you in post-hearing questions for the record whether the Administration could carry out drone strikes inside the United States. In your response, you emphasized that the Administration “has not carried out” such strikes and “has no intention of doing so.” I do not find this response sufficient.

The question that I and many others have asked is not whether the Administration has or intends to carry out drone strikes inside the United States, but whether it believes it has the authority to do so. This is an important distinction that should not be ignored.

Just last week, President Obama also avoided this question when posed to him directly. Instead of addressing the question of whether the Administration could kill a U.S. citizen on American soil, he used a similar line that “there has never been a drone used on an American citizen on American soil.” The evasive replies to this valid question from the Administration have only confused the issue further without getting us any closer to an actual answer.

For that reason, I once again request you answer the following question: Do you believe that the President has the power to authorize lethal force, such as a drone strike, against a U.S. citizen on U.S. soil, and without trial?

I believe the only acceptable answer to this is no.

Until you directly and clearly answer, I plan to use every procedural option at my disposal to delay your confirmation and bring added scrutiny to this issue and the Administration’s policies on the use of lethal force. The American people are rightfully concerned, and they deserve a frank and open discussion on these policies.