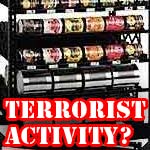 In a warning from Rand Paul from the senate floor, where he speaks out against provisions in the National Defense Authorization Act, we learned today that the government considers having guns or storing more than 7 days of food a possible terrorist activity.

He warns that under new provisions in the National Defense Authorization Act, the federal government can lock you up indefinitely if you are suspected of activities that they consider terrorism related. That’s right the military will now have the power to lock up anyone, even American citizens, without due process and without being convicted of a crime.

More Video of Senator Paul asking Senator McCain to clarify if Americans could be imprisoned:


More from Rand Paul on the detention of American Citizens: