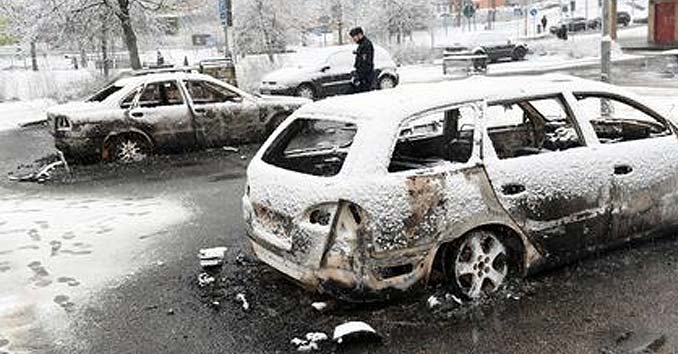 As the mainstream media feverishly attempts to cover up the ongoing crisis in Sweden, the Associated Press is reporting that Riots have yet again broken out in Rinkeby, just north of Stockholm.

Just two days after President Trump was viciously attacked by left-wing news organizations for exposing the chaos in Sweden, riots, looting, and violence broke out in a predominantly Muslim immigrant neighborhood in the northern suburbs of the country’s capital, Stockholm.

The violence started late Monday night and carried on for over four hours. Several vehicles were set on fire, shops were looted, and rioters attacked Swedish police officers with rocks. 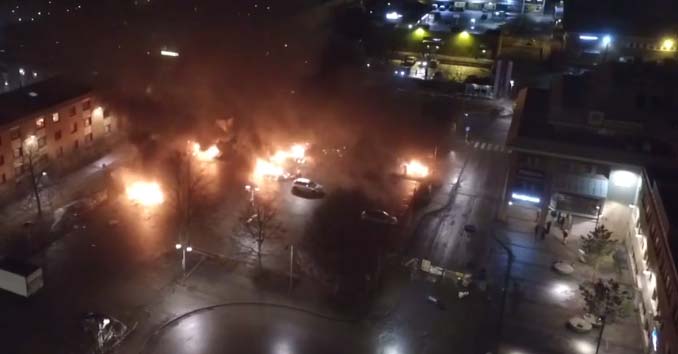 A photographer for Dagens Nyheter, one of Sweden’s largest newspapers, was attacked by a mob of fifteen men as he attempted to document the chaos.

I was met with a lot of punches and kicks on both the body and the head. I have spent the night in the hospital,” Dagens Nyheter reports.

The violence in this area of Sweden is nothing new; in fact, officers on patrol in the migrant-dominated suburb of Stockholm were attacked just last week by a mob of between 20 and 30 people, according to Stockholm police spokesman Eva Nilsson.

But quite possibly the most dangerous part of all of this wasn’t the riots; it is radical left’s attempt to destroy our first amendment rights, and their attempt to silence their opposition by branding them as bigots or their new chosen propaganda term, “fake news.”

In Sweden, people are actually being prosecuted under hate speech laws, simply for speaking out about the refugee crisis. As I pointed out in my article on Sunday, Peter Springare, a Swedish police investigator and former deputy head of the division for serious crimes in Örebro, was charged with “racial agitation” for posting a message on Facebook that highlighted the crisis.

Political Correctness is Putting us All in Danger

On Sunday, I published an article detailing the ongoing crisis in Sweden. Over the last 48 hours, I have received hundreds of threatening and vile messages from unhinged mental defectives, accusing me of spreading fake news and promoting hate speech. Ironically, these malcontents had no problem spewing their hatred for me, calling me every racist name you can think of while threatening acts of violence and then threatening to report me for spreading fake news.

As I’ve been warning in multiple articles over the last couple of months, there are radical left-wing groups pushing this chaos. They are attempting to rile up the masses; they are attempting to smear and silence anyone in the media who dares to report the truth; and as I wrote about earlier in the month, they are well-funded and well-connected!