Yesterday we detailed Obama administration plans that called for Russian troops to train on U.S. Soil at Fort Carson Colorado. While a number of people emailed us claiming these drills have been going on for years, news broke this morning that may make that story even more relevant and disturbing.

The beginning of a new Cold War? 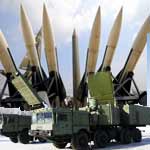 He warned that if talks with Washington continue to stall, “A decision to use destructive force preemptively will be taken if the situation worsens.”  He then stated that talks were already “close to a dead end.”

Officials in Washington are saying that Makarov’s statements are meant to pressure the U.S. into agreeing to Russian demands ahead of this months NATO summit in Chicago. But it might not be an empty threat.

President Dmitry Medvedev said last year that Russia will use military force  if the U.S. failed to agree to the terms that they were seeking.  “Russia fears that the U.S. missile defense sites threaten Russian security, and have publicly stated that they will take necessary military actions to prevent the missile defense system from being activated in Central Europe.