Multiple shooters, dressed in what police are calling “tactical gear”, executed 14 people earlier today, in what is now being described as a terrorist attack performed by Islamic extremists.

Authorities said as many as three shooters, heavily armed and wearing GoPro Cameras, opened fire at the Inland Regional Center social services facility in San Bernardino, CA. The shooters killed 14 people, and wounded another 17 who were having a Christmas party in a rented conference room within the building. 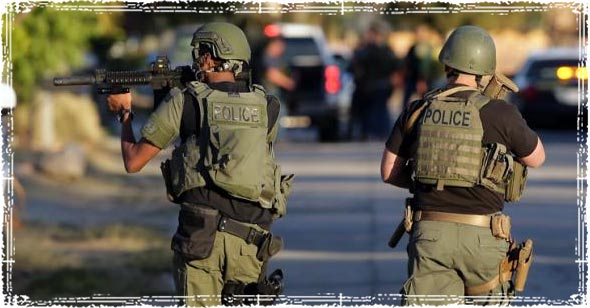 Four hours later, and just two miles away, a gunfight erupted between San Bernardino law enforcement officials and two of the suspected shooters, one male and one female. The male and female were wearing protective body armor and carrying several firearms. “They came prepared to do what they did, as if they were on a mission,” San Bernardino Police Chief Jarrod Burguan said.

This name corresponds to police scanner activity from earlier today which identified two of the suspects as Farooq Saeed and Tayyeep Bin Ardogan. The Daily Beast is reporting that police have just executed a search warrant at a Redlands, California address—an address that belongs to Farook’s family.

The second suspect has been identified as Tashfeen Malik (originally reported as Tayyeep Bin Ardogan), a 28 year-old female citizen of Pakistan. A bag believed to belong to Farook and Malik was later found at the site of the shooting. Inside, law enforcement officals discovered three bombs packed with black powder and rigged to a remote-controlled car. Additional IEDs were found in the SUV the suspects were driving.

While the FBI is still not calling today’s mass shooting a terrorist attack, in a press conference earlier today they admitted that it was a very real possibility. An FBI spokesman said: “It is a possibility but we don’t know that yet. And we’re not willing to go down that road yet.”

According to the New York Daily News, Farook’s father confirmed in an interview that his son inspected restaurants and hotels for health violations, and was married with a child. He also identified his son as “very religious. He would go to work, come back, go to pray, come back. He’s Muslim.”

Sadly it seems law enforcement officials knew who these guys were, but refused to tell the public who they should be on the lookout for. They put lives at risk for the sake of political correctness.

White House refusing to acknowledge terrorism, but has no problem blaming Guns

“We don’t yet know what the motives of the shooters are but what we do know is that there are steps we can take to make Americans safer,” Obama said in the interview. “We should never think that this is just something that just happens in the ordinary course of events because it doesn’t happen with the same frequency in other countries.”

But he wasn’t the only Democrat to immediately try to politicize the terror attack. Before anyone even knew what happened, and while the scene was still very active, Democrats wasted no time using the tragedy to push their gun control agenda. Less than an hour into the active manhunt, Hillary Clinton took to Twitter to push her agenda.

I refuse to accept this as normal. We must take action to stop gun violence now. -H https://t.co/SkKglwQycb — Hillary Clinton (@HillaryClinton) December 2, 2015

Horrifying news out of #SanBernardino. Enough is enough: it’s time to stand up to the @NRA and enact meaningful gun safety laws — Martin O’Malley (@MartinOMalley) December 2, 2015

This all comes as President Obama ramps up efforts to bring tens of thousands if Syrian Refugees into the country, and after the FBI admitted thousands of ISIS sympathizers were already working inside the United States.