While the Obama administration is still refusing to call the San Bernardino mass shooting a terrorist attack, instead seeking to blame American gun polices for the tragedy, multiple sources are now confirming that the shooters, Syed Rizwan Farook and Tashfeen Malik (originally reported as Tayyeep Bin Ardogan), were both radicalized by Islamic Jihadists. 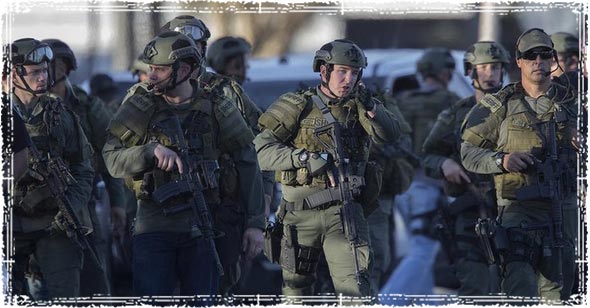 According to multiple sources, Farrok was in contact with at least a couple of different international terrorists who were actively being investigated by the FBI.

CNN, who initially blamed the attack on “three white males”, is now reporting that “San Bernardino shooter Syed Rizwan Farook was in touch over the phone and via social media with more than one international terrorism subject who the FBI were already investigating.”

Co-worker Patrick Baccari told the Los Angeles Times that Farook recently visited Saudi Arabia to meet a woman he met online. They returned as husband and wife. According to authorities, that woman was the second suspect, Tashfeen Malik.

FBI Spokeman David Bowdich confirmed at a Press conference earlier this morning that the female traveled here with Farook from Pakistan in 2014, and was in the country on a K1 Visa. He refused to say what other countries the couple had traveled to while in the Middle East.

In the press conference this morning, San Bernadino police confirmed that this was a well-coordinated attack that had nothing to do with a dispute at the Christmas party. Authorities confirmed that Farook was previously at the party, but said that is was a planned attack that was not a spontaneous event.

According to multiple federal and regional sources familiar with the investigation, the suspects left a remote-controlled bomb on the scene of the holiday party, similar to those used by the Tsarnaev brothers in the 2013 Boston Marathon bombing. The aim was to kill police and medical personnel. The devices apparently malfunctioned.

FBI Spokeman David Bowdich is still refusing to call it a terrorist attack, probably on direct orders from the White House, but he did admit that both suspects came into the U.S. from the Middle East in July 2014.

San Bernardino Chief of Police Jarrod Burguan said in a Press Conference this morning that multiple explosive devices were found during their investigation. Multiple rounds of ammo were found at Farook’s house in Redlands, including IEDs and bomb making tools. Chief Burguan said it looked like they could have been preparing for another attack.

Other possible suspects are still being sought, including six Middle Eastern men who had been seen coming in and out of Farook’s home, a home that some officials have described as a makeshift IED factory.

A man who had been working in the Redlands area, where Farook’s home was located, said he noticed a half-dozen Middle Eastern men in the area in recent weeks, but decided not to report anything because he did not wish to racially profile the Middle Eastern men.

So yet again, political correctness has helped the terrorists carry out another horrific attack, because people were too afraid of being called bigots. This is what happens when you have a government who refuses to name the enemy, and does everything they can to demonize anyone who speaks out against Radical Islam.

You cannot count on the Government to protect you from this threat!

The threat of radical Islamic terrorism is one of the greatest threats we face; We cannot continue to bury our heads in the sand, hoping the government has it figured out; THEY DON’T! These people are already in our country, and they are likely preparing for more attacks.

This morning, the Sheriff of Ulster County, New York advised all citizens to carry their pistols. The Sheriff posted on the Ulster County Sheriff’s Office Facebook page the following message:

“In light of recent events that have occurred in the United States and around the world I want to encourage citizens of Ulster County who are licensed to carry a firearm to please do so,” wrote Sheriff Paul J. Van Blarcum in a Facebook post. “I urge you to responsibly take advantage of your legal right to carry a firearm. To ensure the safety of yourself and others, make sure you are comfortable and proficient with your weapon, and knowledgeable of the laws in New York State with regards to carrying a weapon and when it is legal to use it.”

December 3, 2015ATTENTION LICENSED HANDGUN OWNERSIn light of recent events that have occurred in the United States…

Things you should be doing to protect yourself:

Develop a Bug Out Plan: According to Iraqi and U.S. intelligence officials, ISIS is aggressively trying to get their hands on chemical weapons. Should they be able to set one of these devices off in the United States, the chaos that will follow is going to be devastating to this country. You need to have a solid evacuation plan, and you need to be ready to go at a moment’s notice.

You need to take Self-Defense Seriously! There is no substitute for real-world self-defense training. Check out these articles to get started: