The Republican Party that came to power promising to fix this country’s massive debt problems has just sold the entire country down the river. Just shortly after 3 a.m. EDT on Friday, with no media coverage and long after most Americans had gone to bed, the United States Senate voted to grow our nation’s debt and bust budget caps. In essence, they gave President Obama a credit card with no spending limit.

The final vote on passage was 64-35, with 18 Republicans helping Democrats ram this reckless spending bill through the Senate. Even Senators who voted against the bill betrayed the American Public by promising to filibuster the bill and then doing nothing to stop it.

After promising to filibuster the bill in the CNBC Presidential debates, presidential candidate and Kentucky senator Rand Paul went to the floor of the senate and then abruptly left after speaking for less than 20 minutes. Paul spoke for ten-and-a-half hours during the debate over the Patriot Act in May, but for this so-called debt deal filibuster he couldn’t muster more than 20 minutes – it seems his promise during the debate was just another failed campaign promise to the American people.

Here is Rand Paul again promising to Fillibuster and do everything he can to stop the bill on Fox News — hours before he promised to do so in the debate.


Paul’s team told ABC news that he didn’t continue the filibuster because Senate majority leader Mitch McConnell (R., Ky.) had already filed cloture, the procedural move to end debate on the debt limit. What he failed to tell ABC news, or the American people when he promised to filibuster the bill on Wednesday night’s debate, is that cloture filling had already been filled 24 hours before Paul promised to filibuster the bill. That means he stood in front of the American people and – surprise, surprise – knowingly lied about trying to stop the bill.

Senator Ted Cruz, who at least spoke on the floor for over an hour-and-a-half, excoriated his Senate counterparts. He blamed the “Washington Cartel” in both parties who have allowed special interests to bankrupt this country.

In a statement released after voting against the bill Ted Cruz said:

“Pay no attention to another roughly $80 billion in debt. Pay no attention to the fact that it is the Republican-controlled Congress giving an unlimited credit card to Barack Obama, scheduling votes at 1 o’clock in the morning, and hoping that no one notices.”

“How is it prudent to continue bankrupting this nation? How is it prudent to have gone from $10 trillion to over $18 trillion in debt? How is it prudent to stay with languishing economic growth from 2008 to today when the economy has grown on average 1.2% a year? That’s prudent? How is it prudent to watch as your children’s and my children’s futures are washed away? How is that reasonable? How is that pragmatic? Why are we not instead trying to fix these problems? And not even just fix them all, not even solve everything with a perfect magical bow. Because leadership plays this game, you can’t let the perfect be the enemy of the good. Where’s the good? Leadership’s position is we can’t do anything. Leadership’s position is that with Republican majorities in both houses, we should spend more, roughly $80 billion, than we did with the Democratic majority, $63 billion.

“And let me note that for the remaining 15 months, we are going to see a binge from this president that makes the preceding six and a half years pale. I shudder to think what President Obama for 15 months will do with an unlimited credit card that the Republican majority in the House of Representatives and the Republican majority in the Senate have handed over to him.” 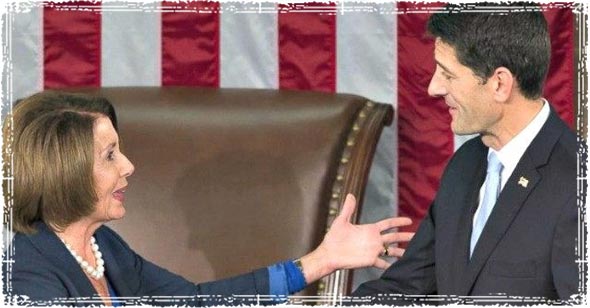 With the passage of this bill, the new Republican Speaker of the House Paul Ryan can further his predecessor’s attempts to screw the nation, without having to worry about the political consequences of fighting through another budget deal. Since this budget deal will raise the government debt ceiling until March 2017, Republicans think they can take cover during the 2016 Presidential election cycle in hopes that the American Public will yet again forget how they sold us out.

These people are the lowest of the low; both sides of the political aisle have yet again sold us down the river, and further helped to ensure the eventual collapse of our economy.