A peaceful protest in support of an eastern Oregon ranching family, who is being persecuted by the federal government for trying to save their own land from wildfires, is in the process of turning into a very ugly situation. On Saturday, militia groups from around the country led by Ammon Bundy, son of infamous Nevada rancher Cliven Bundy, who had his own standoff with the federal government in 2014, took over a federal building in a national wildlife refuge in Oregon. 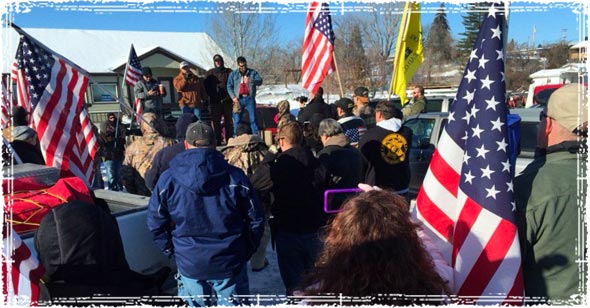 Bundy, told The Oregonian that he and two of his brothers were among a group of dozens of militia occupying the headquarters of the Malheur National Wildlife Refuge. Ammon Bundy said the group planned to stay at the refuge indefinitely. “We’re planning on staying here for years, absolutely,” Ammon Bundy said. “This is not a decision we’ve made at the last minute.”

Before occupying the wildlife refuge Bundy posted this video to Facebook, urging the American people to stand up to the Federal Government.

Stand Up, Not Stand Down – All Patriot Stand Up, We need your …**ALL PATRIOTS ITS TIME TO STAND UP NOT STAND DOWN!!! WE NEED YOUR HELP!!! COME PREPARED.

Feds send in FBI to “Take control of the situation”.

According to KOIN 6 News in Portland, Oregon the FBI is now working with local law enforcement to put an end to the standoff. The FBI will be “the lead agency in dealing with the armed militants.”

Liberal activists, who supported the so-called protests in Ferguson and Baltimore, are calling for the federal government to kill Bundy and the militia. Montel Williams took to Twitter demanding the Feds send in troops “with shoot to kill orders.”

Totally fine with a massive use of deadly force in Oregon to take out Ammon Bundy. #OregonUnderAttack pic.twitter.com/A9F90qnBaW

Then let’s give them some – put this down using National Guard with shoot to kill orders. https://t.co/KSzUZzUor6

It’s ironic that people who supported a whole entire city being burnt down are now the ones calling for the national guard to “put down” the protesters in Oregon. Remember, in Baltimore government officials actually ordered the police to stand down and watch as criminals looted and burnt down the city. Yet this time we have people calling for shoot to kill orders.

Despite claims that the Bundy’s are just trying to spark some sort of armed conflict, the real story here begins with yet another case of abuse and government corruption where the Bureau of Land Management is attempting to skirt the Constitution and illegally remove an Oregon family from their ranch.

Dwight Hammond, 73 and son Steven Hammond, 46, were convicted of terrorism and arson charges after setting backfires on federal land in 2001 and 2006 to reduce the growth of invasive plants and protect their property from wildfires. Dwight was sentenced to three months in Federal Prison and his son received a sentence of 1 year.

Despite both father and son serving their full court ordered prison term, the federal government in October moved to prison the Hammonds again — for a crime they had already served time on, thus violating the Double Jeopardy Clause of the Fifth Amendment to the United States Constitution.

A federal judge ruled that their first terms were too short under U.S. minimum sentencing law and ordered them back to prison for about four years each. This decision has sparked outrage throughout the western states, and has many ranchers claiming that this is just another attempt to intimidate the last of the ranching families to give up their land to the federal government.

In an interview with The Associated Press on Sunday, Ryan Bundy, Ammon Bundy’s brother, said the protesters’ ultimate goal is to turn the land over to local authorities so people can use it free of federal oversight.

They want to “restore the rights to people so they can use the land and resources” for ranching, logging, mining and recreation.

Ryan Bundy says the federal government has been “tromping on people’s rights and privileges and properties and livelihoods.”

“I understand the land needs to be used wisely, but that’s what we as stewards need to do. A rancher is going to take care of his own ranch,” Ryan Bundy said.

In October Tri-State Livestock News did a story on the Hammond family and the sentence they received. According to area ranchers, the decision to prosecute the Hammonds can be tied back to the BLM trying to designate Steens Mountain as a federal monument.

According to Erin Maupin, a former BLM range technician and watershed specialist, backfires by other ranchers had burned BLM land in the past and the agency had not taken action. It seems the only reason the Hammonds were prosecuted is that once they are out of the picture the BLM can exploit the plentiful natural resources on federal and “monument” land in Harney County.

“The last holdouts on that cow-free wilderness are the Hammonds,” said Maupin.

“It’s become more and more obvious over the years that the BLM and the wildlife refuge want that ranch. It would tie in with what they have,” Rusty Inglis, an area rancher and retired US Forest Service employee, told the trade publication.

Dwight Hammond has said he and his son plan to peacefully report to prison Monday as ordered by the judge.

What is most sickening about this whole thing is here you have an American family who was just tying to save their land now being prosecuted as terrorists, while the feds allow real terrorists into the country without batting an eye. But if you want to look at this from purely an environmental standpoint, then consider the fact that not a single EPA official has ever been prosecuted or lost their job over the Animas river disaster — one of the largest economic disasters to ever hit the Southwestern United States. You have entire cities along the Animas river in Colorado who are without drinking water because of the EPA’s criminal negligence, but not a single person was ever held accountable in that case. It seems the feds don’t play by the same rules as the rest of us.