A new study from NASA and the University of California suggests the entire Southwestern United States may be in for some major trouble in the very near future. 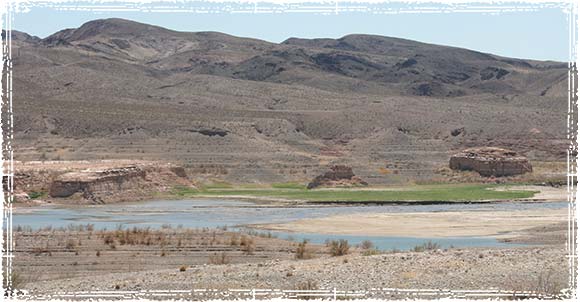 Over the last decade, much of the water that the Southwest depends on has been depleted to levels that may soon cripple the entire region

This month Lake Mead, the country’s largest reservoir, dropped to its lowest level since it was filled after the completion of the Hoover Dam in the 1930’s. In fact, it’s getting so bad that the lake is now dropping at a rate of one foot a week.

The entire southwest region of the United States, most of which is a desert to begin with, is in the middle of a historic 14-year drought. The extreme drought conditions, combined with an unrelenting migration of people into areas that were never meant to sustain this much development, have caused water levels in Lake Mead to drop over 130 feet since the year 2000.

Lake Mead provides fresh drinking water to over 20 million people in southern Nevada, southern California and Arizona. Things are so out of control that the two intake pipes that provide water to Nevada could soon be above water, which has local water officials rushing to build a third emergency intake pipe. Without these water intake pipes, Las Vegas would not exist.

But even if the third intake pipe is built on time, the trouble is far from over. Once the lake falls below the two existing pipes something else happens: The power starts to go out in Las Vegas. When Lake Mead falls below 1,050 feet, the Hoover Dam’s turbines shut down. When that happens, its lights out for Las Vegas.

According to a joint study carried out by NASA and the University of California, the problems at Lake Mead may actually pale in comparison to what’s going on in the Colorado River Basin, the river that feeds Lake Mead and provides water to 40 million people in seven states.

Over the last nine years the Colorado River Basin has lost almost twice as much water as Lake Mead. Even more troubling, is what scientists think is happening to the ground water.

“We don’t know exactly how much groundwater we have left, so we don’t know when we’re going to run out,” said Stephanie Castle, a water resources specialist at the University of California, Irvine.

“This is a lot of water to lose. We thought that the picture could be pretty bad, but this was shocking.”

If drastic steps aren’t taken soon, the entire Southwestern United States is going to be in some serious trouble, which will affect the entire country.

Most people think water shortages only occur in distant third world countries, but very soon this may be a reality for much of the Southwestern United States. Given how we manage the Colorado River today, the entire region faces a significant risk of shortage.

From a major loss of electricity when the Hoover Dam Turbines shut down to farmland that will quickly turn back into a desert landscape, everyone is going to feel it. Much of this water goes to irrigating around four million acres of farmland that cannot exist without it. Once it starts hitting the farms in California, the rest of the country is going to feel it – not to mention the chaos caused by a flood of people what will inevitably have to start migrating back east.