A slow moving underground fire at a Radioactive Waste site near St. Louis Missouri could soon cause millions of people to have to evacuate. 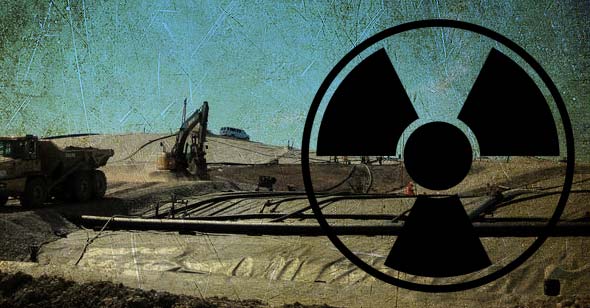 Local St. Louis area residents are demanding to know what the government is doing about an underground fire at the Bridgeton, Missouri Landfill that could soon reach 1940’s atomic bomb production waste that is being stored in the landfill.

An underground fire that has been smoldering for the last five years is now only 1,000 feet from the radioactive waste that was buried on the site illegally in 1973. The landfill. which is owned and operated by Republic Services Inc., contains two highly-radioactive operable units (OU-1 and OU-2), both of which contain radioactive material. Soil samples from the dump have shown the presence of barium sulfate cake, Uranium and Thorium.

Last month, Missouri Attorney General Chris Koster released a report saying the fire could reach the radioactive waste within three to six months. If that happens, radioactive fumes and particulate matter could be spread throughout the region. Koster’s report contradicts landfill owner Republic Services’ assurances that the fire is under control. Koster is suing Republic Services for  the still-burning fire that he says is already poisoning local residents.

“Republic Services does not have this site under control,” Koster said. “Not only does the landfill emit a foul odor, it appears that it has poisoned its neighbors’ groundwater and vegetation.”

According to government documents, documents that were not made publicly available until last month, a plan was quietly put in place that includes large-scale evacuations and shelters to protect residents from the radioactive waste. The documents warn that the disaster could “occur with little or no warning.”