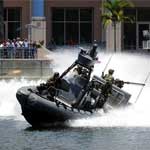 The urban training drills included an assault by land, sea and air which simulated a mock terrorist attack that included terrorists kidnapping Mayor Bob Buckhorn. The Special forces included international troops from around the world with countries like; Australia, Brazil, Canada, Colombia, Jordan, Norway, Poland, Thailand and the United Arab Emirates all playing a role in the drill.

The mock attack comes less than 100 days before 50,000 people are expected to occupy  Tampa for the Republican National Convention.

From the urban warfare drills in Chicago, Miami, and Los Angeles to the gigantic show of force during Chicago’s NATO summit, some are starting to wonder what these drills are really all about. While we get that our troops need to train, the overwhelming number of recent urban warfare drills on the streets of America really makes you wonder what’s about to go down. Does the government have intel that suggests a future attack, or is this just to desensitize Americans to the site of military patrolling the streets of America?

In the past, this probably wouldn’t have raised much concern. But when you read stories about the Obama administration installing a Death Czar, Congress giving the White House the power to detain American citizens without a trail, and the Attorney General of the United States suggesting that the White House has the power to kill American citizens; a few alarm bells start to go off.