Police are confirming that an Islamic Terrorist attacked visitors at a mall in St. Cloud, Minnesota late Saturday night. 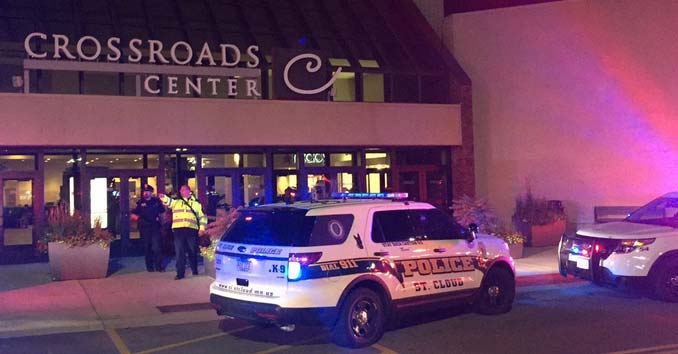 At least eight people were stabbed at the Crossroads Mall in St. Cloud, Minnesota by a suspect in a private security uniform who made several references to Allah. The suspect asked at least one victim if he was Muslim, before attacking visitors with a knife, according to St. Cloud Police Chief Blair Anderson.

The chief said the suspect entered the mall around 8 p.m. and “made some references to Allah, and we have confirmed that he asked at least one person if they were Muslim before he assaulted them. We do know there were approximately eight people transported to the St. Cloud Hospital with non life-threatening injuries. The suspect was confronted by an off duty police officer and summarily shot and killed….no customers were killed.”

Multiple Terror Attacks Throughout the U.S.?

Officials noted that there is “no evidence” that other individuals were involved in the attack, but the terror attack follows a bomb explosion in Chelsea, Manhattan that left 29 people wounded and a pipe bomb attack at a Marine charity race in Seaside, New Jersey on Saturday.

While the mainstream media seems to be in coverup mode, and our president is nowhere to be found, it’s becoming apparent these attacks were all at least loosely associated. In fact, an Islamic State-run news agency claims the man from the Minnesota attack was a “soldier of the Islamic State.”

The Islamic State Rasd news agency reported the claim on Sunday, claiming the terrorist had heeded calls from the extremist group to attack countries that are part of a U.S.-led anti-IS coalition. And shortly after the attack in New York, supporters of the Islamic State rushed onto Twitter to celebrate the bombing.


“The lions of the Caliphate roar in New York, we cause you pain inside your house, the carrier of the Cross,” wrote one Twitter whose accpunt has since been suspended . Another, called “The Lone Wolves,” tweeted with the Arabic hashtag #ExplosionManhattanNewYork “Oh God burn America, take revenge in the name of your oppressed slaves and believers’ blood.”

You need to be Prepared: The Government has Proven they are Not!

I’ve talked about the threat numerous times in the past; read my article on what you should be doing to prepare for the terrorist threat. When you have a government that is more concerned with offending terrorist groups than they are in protecting their own citizens, we have a serious problem.

The public needs to wake up and understand that we are under attack. The threat of radical Islamic terrorism is one of the greatest threats we face as a nation because the people running this country refuse to name the enemy and refuse to take actions against them. You need to start taking steps to prepare yourself and your family.