Well, it looks like gun owners are going to be the sacrificial lamb yet again, as both the Trump administration and the NRA have decided to push for unconstitutional ATF/DOJ gun control regulations. 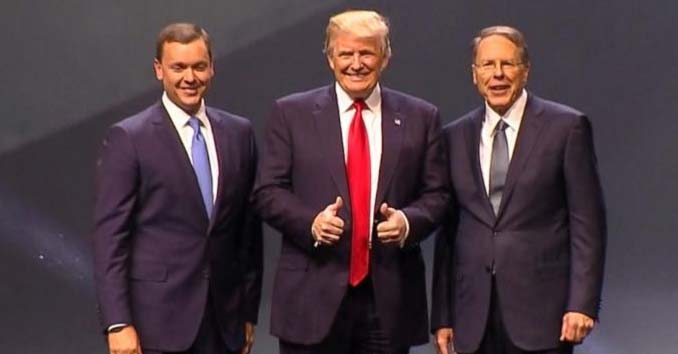 On Tuesday afternoon, President Donald Trump ordered Attorney General Jeff Sessions to propose a regulation to make bump-stocks for guns illegal, something neither one has the constitutional power to do.

“Just a few moments ago I signed a memo directing the attorney general to propose regulations that ban all devices that turn legal weapons into machine guns,’” Trump said at a Medal of Valor event at the White House, addressing Attorney General Jeff Sessions. “I expect these regulations to be finalized, Jeff, very soon,” Trump said.

Earlier in the day, White House press secretary Sarah Sanders said Trump ordered the Justice Department and the Bureau of Alcohol, Tobacco, Firearms, and Explosives to review bump fire stocks, which she said had been completed. She said movement on that front would take place shortly.      “The President, when it comes to that, is committed to ensuring that those devices are — again I’m not going to get ahead of the announcement, but I can tell you that the President doesn’t support use of those accessories,” Sanders said.

Ironically, the NRA – the lying ass bastards who claim to protect the second amendment, but really only care about fundraising – fully supports the Bump Stock regulations.

Of course, they stop short of calling for legislation banning the bump stock; they instead support Trump’s illegal and unconstitutional attempt to push the regulation using the ATF to circumvent congress and the constitution.

During Tuesday’s press briefing, White House Press Secretary Sarah Sanders was asked about a proposed “assault weapons” ban and said, “We haven’t closed the door on any front.”

Sanders on whether Trump supports a ban on assault weapons: “I don’t have any specific announcements but we haven’t closed the door on any front” https://t.co/VkPYhoBuJI

Sanders went on to say “the next several days and weeks” will witness conversations on where changes in current laws might be made.

The slippery slope to Losing our Gun Rights

So what’s next? Of course, we will have the wishy-washy Republicans fully supporting this unconstitutional regulation, but once you open this door, it’s a door that can’t be shut.

For the record, I actually think Bump Stocks are stupid; but the Trump administration has no constitutional right to ban them.

Executive Director Erich Pratt, of Gun Owners of America — an actual gun rights organization who doesn’t back down like the pussies over at the NRA — opposes the ban saying back in October, “Any type of ban will be ignored by criminals and only serve to disarm honest citizens.”

Every gun owner needs to pay attention here, whether you like Bump Stocks or not because the GOA is right on this one.

If the ATF can regulate bump stocks, then they can regulate triggers, bolts, magazines, and any other accessory they want.

Springfield, VA – President Donald Trump released a memo to direct the attorney general to seek comments on a rule purporting to ban bump stocks. The memo, states, in part:

“Today, I am directing the Department of Justice to dedicate all available resources to complete the review of the comments received, and, as expeditiously as possible, to propose for notice and comment a rule banning all devices that turn legal weapons into machineguns.”

“If President Donald Trump’s goal is to ban bump stocks, then that is a gross infringement of Second Amendment rights. GOA has long warned that such a ban can easily be applied to triggers, magazines, or semi-automatic firearms.

“Additionally, a ban on bump stocks would ignore the ATF’s previous public comment period that garnered over a hundred thousand comments, which were overwhelmingly anti-regulation.

“Banning bump stocks will not stop criminals from getting guns, but it can be used by gun controllers to ban triggers, magazines, and semi-automatic firearms.

“While Trump ran as a pro-gun candidate, this action does not appear to line up with his campaign rhetoric. Instead of further restricting the right to keep and bear arms, Trump should urge Congress to pass H.R. 34, which would repeal gun-free school zones, an issue Trump campaigned on.

“Regardless of Trump’s future actions on bump stocks, Gun Owners of America remains committed to fighting any bump stock ban or regulation — including the use of legal action.”