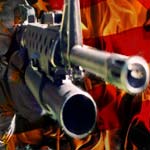 In a speech on Tuesday the Attorney General of the United States tried to lay out the government’s case for killing American Citizens overseas.
YEP, KILLING AMERICAN CITIZENS!

The Obama Administrations policy of extra-judicial killings of American citizens abroad is being trumpet by the Attorney General this week as he lays out the legal case for murdering American citizens without a trail.

The Attorney General, Eric Holder, suggested in a speech earlier this week that the President of the United States has the power to kill anyone outside the United States he feels might be dangerous. When you combine this type of thinking with the recent passage of the National Defense Authorization Act, which allowed for the indefinite detention of American Citizens without a trail, it has some wondering…..

What about killing American Citizens in America, is that now allowed?

FBI Director Robert Mueller was asked yesterday on Capitol Hill that exact question. The House wanted to know if the Obama Administration’s policy of extra-judicial killings of American citizens abroad could also apply inside the United States as well.

At first the F.B.I. Director tried to evade the question, but when pressed he finally stated that he was not certain if the government had the right to kill our own people.

You better be damn certain! How the hell does the Director of the F.B.I. not know that the government doesn’t have the right to kill Americans that they deem to be “dangerous”? The fact that this is being talked about at any level of the Federal Government is absolutely appalling. But for the Attorney General of The United States to put forth a legal case for doing so is beyond belief.