After armed government agents stormed a small ranch in Nevada last weekend, illegally stealing a rancher’s cattle and attempting to force him off his land, there is growing concern over the 13,000 armored military vehicles (MRAPs) that the federal government is giving to local police departments throughout the country.

Over the last couple of years, I’ve talked about the militarization and federal government takeover of our local police departments, but the pace at which they seem to be taking over is increasing at an alarming rate. Over the last couple of months, the federal government has started distributing Mine Resistant Ambush Protected (MRAPs) vehicles to police forces throughout the U.S., many of which are going to small rural areas of the country that in no way would ever need a Mine-Resistant Ambush Vehicle.

This weekend, according to a local news report out of Michigan City, Indiana, the Michagan City police department was given –  at no cost – a $793,000 a Mine Resistant Ambush Protected (MRAP) vehicle to be “used for training, incident command, active shooter events and high-risk warrant services.” 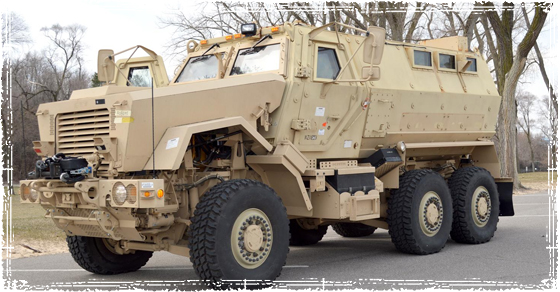 This is a town of only around 31,000 people; so why the federal government is giving them, and hundreds of other small towns across the country military vehicles is a bit frightening –  especially when you consider the fact that they were designed to take out terrorists in Afghanistan and Iraq. Just who are these vehicles meant for, and why are the feds attempting to get so cozy with state and local law enforcement officers? Do we really need 13,000 MRAPs patrolling the streets of America?