In a collective freakout from morons like Dana Loesch and her Steroid Freak Hipster Husband, the Lynch mob went into overdrive this weekend with threats of boycotts because supposedly Yeti Coolers now hates gun owners. 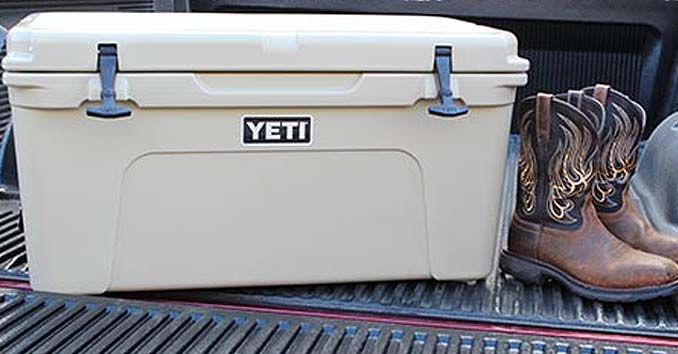 So what really happened?

Well, the dipshits who make a living off of pushing other dipshits into a hysterical frenzy started crying like a bunch of hypersensitive pussies because Yeti Coolers ended a legacy vendor program that just happened to include the NRA.

Of course, dumbshits like Dana Loesch and her hipster Husband went online to drum up more publicity for themselves — because they really don’t care about the second amendment, this is all just to make themselves famous — with threats of a boycott.

Hi @YETICoolers – you should reverse this terrible decision. Do you not understand who your base is? Will never buy or use any of your products again and we had a bunch. https://t.co/NAiB7Yb8KX

I know; some mentally unstable idiots are going to have a meltdown because I dared to say something about the NRA and their paper tigress Dana Loesch — maybe the hero worshipers should look into her past as a pro-abortion, Anti-gun, Democrat Operative before blindly following people who change their shtick when they realize there is more money in tricking conservatives into thinking you are one of them.

Frankly, I’m about as fed up with the NRA as I am with the losers on the left.

Not supporting the NRA doesn’t make you Anti-Gun; in fact, I DON’T SUPPORT THE NRA — I think they are a bunch of greedy pussies who stopped carrying about gun owners long ago, I would rather give my money and my support to a real gun organization like Gun Owners of America instead of the phonies over at the NRA who bow down to the anti-gun left and help push things like the Bump Stock Ban.

So is YETI Coolers Anti-gun?

If they are, I don’t see it. They may have stopped a Legacy Vendor Program that just happened to include the NRA, but so far they have said nothing against the second amendment or against gun owners. In fact, a great number of the people they sponsor are pro-gun, hunters and sportsmen. Here is a response from one of them…

Fake news got people mad as hell, but yeti never dropped the NRA and their support for hunters, conservation and the 2nd Amendment is still as strong as it’s always been. @yeti is a great company so don’t believe everything you read. #supportyeti #yeti #hunterowned #2ndamendment

If YETI comes out and says they don’t support the Second Amendment, then I would pull my support for YETI, but when we start blindly following every idiotic protest and overreacting without the facts we become no better than the Anti-Gun left and all their hyperbolic bullshit!

A few weeks ago, YETI® notified the NRA Foundation, as well as a number of other organizations, that we were eliminating a group of outdated discounting programs.

These facts directly contradict the inaccurate statement the NRA-ILA distributed on April 20 2018.

Further, the NRA-ILA stated in that same public communication that “[YETI has] declined to continue helping America’s young people enjoy outdoor recreational activities.” Nothing is further from the truth.

YETI was founded more than 10 years ago with a passion for the outdoors, and over the course of our history we have actively and enthusiastically supported hunters, anglers and the broader outdoor community. We have been devoted to and will continue to directly support causes tied to our passion for the outdoors, including by working with many organizations that promote conservation and management of wildlife resources and habitat restoration.

From our website to our film footage and from our social media posts to our ambassadors, YETI has always prominently featured hunters pursuing their passions. Moreover, YETI is unwavering in our belief in and commitment to the Constitution of the United States and its Second Amendment.