It’s not the walking dead you have to worry about; it’s the 70 million Americans who are now taking at least one mind altering drug. 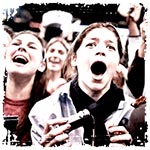 We’ve touched on the subject in the past, but according to an article released today by World News Daily the problem might be even worse than we thought. According to WND, over 70 million Americans are now taking some sort of mind altering drug. The number, which includes both people taking illegal “street drugs” and legal “therapeutic prescription drugs,” highlight the real trouble we are in.

What was once thought of as an inner-city problem, that primarily affected people using illegal street drugs, has morphed into a monster that has received very little attention. The problem is so bad, that there’s a pretty good chance you have encountered at least a dozen people today who were taking some sort of mind altering medication.

When we covered this topic last year, 1 in 5 Americans were taking at least one behavioral pharmaceutical drug on a daily basis – this didn’t take into account the staggering 22 million Americans, nearly 9% of the U.S. population, who use illegal street drugs. With the legalization of marijuana in a number of states, and the push to legalize it on a federal level, the number of people attempting to escape reality is likely to skyrocket even higher in the coming years.

A Nation of Zombies

When writing articles for this site, I look at everything from the perspective of emergency preparedness. When it comes to this issue, I think we are witnessing a ticking time bomb.

What happens to these people during a disaster?

With so many Americans now utterly dependent on these drugs, what happens to these people when they aren’t able to get their medications? In my opinion, our society is just one disaster away from total collapse; when that collapse happens, I think we are going to have a lot to worry about when it comes to people taking these types of drugs.

Besides the fact that many of these medications are incredibly dangerous, and create a variety of side effects — including psychological symptoms like anxiety, agitation, crying spells, irritability and aggressiveness — what happens to an person who suddenly stops taking them is even scarier.

The syndrome can produce a wide array of troubling side effects, including suicidal thoughts, violence and mania.

These drugs are not to be taken lightly. In fact, according to another WND study from 2012, almost 90 percent of school shootings over more than a decade have been linked to a widely prescribed type of antidepressant called selective serotonin reuptake inhibitors or SSRIs.

We are literally seeing a sort of Zombie apocalypse play out before our very eyes.