There are basically two types of ammunition, the cartridge and the shotshell. Rifle and handguns use a cartridge contain a projectile (bullet). Shotguns use a shotshell which contains either a number of small projectiles (known as shot) or a single projectile (known as a slug). 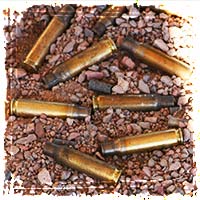 The components of both types of ammo are pretty similar; they both have the same basic components which include the case, the primer, gunpowder, and a projectile.

How does the ammo fire?
Ammunition is fired when a guns firing pin hits the ammo’s primer. This causes a spark from the primer to ignite the gunpowder. Gas is then converted from the burning powder which forces the projectile out of the case and down the barrel of the gun.

The illustration below shows the internal parts of both types of ammo. 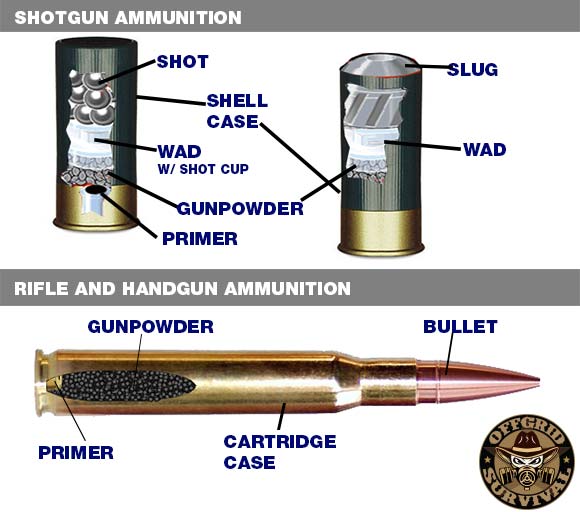 What is the Best Self Defense Round? 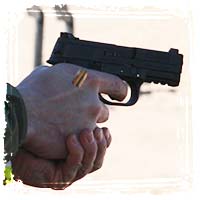 This may shock a few people, but in my opinion, when it comes to handguns the best round is the round you have available. The fact is, even .22lr ammo is a perfectly acceptable self-defense caliber. In the hands of a skilled shooter, a .22lr round is just as effective as any other round in a self-defense situation.

When it comes to self-defense rounds, you often hear people talk about stopping power. While personally I would rather carry a 9mm over the .22, the fact is, any law enforcement officer who’s ever had to fire his weapon can tell you that even a 40 caliber round fired at center mass might not be enough to immediately stop an aggressor.

A good example of this can be seen an incident reported at lawofficer.com.  Officer Peter Soulis, who was involved in a shootout during a routine traffic, pumped 22 shots into the aggressor, 17 of which hit center mass. Despite hitting the assailant so many time, the criminal was able to return multiple rounds of fire, and lived another 4 minutes after the last shot was fired.

In another great study on the stopping power of ammunition, it was found that the .22 caliber round was just as effective at stopping a criminal as any other round of ammunition. In fact, the .22 had one of the highest fatality ratings and one of the lowest number of rounds fired until incapacitation. In my opinion, this shows that shot placement is much more important than the round that’s being fired.

Is old ammunition safe to shoot?

It really depends on how the ammo was stored. Improperly stored ammo can be damaged by environmental conditions, especially humidity.

If I was buying something that had been in storage for a long amount of time, I would definitely be concerned with how that ammunition was stored. Improper storage can cause a whole host of problems. Primers can lose their sensitivity, charges can deteriorate, and cartridges can become brittle and even rupture when fired.  You also have to watch out for corrosion problems that can actually change the size or characteristics of the ammunition.

How Should You Store your Ammo? 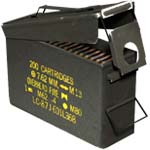 With the recent difficulties in finding ammunition supplies, more and more people are thinking about storing ammo for long periods of time.

Environmental conditions like extreme humidity can cause ammo to deteriorate pretty quickly. While the cardboard boxes that most ammo comes in should be sufficient for short-term storage, there are a couple of precautions that should be taken when storing ammo for long periods of time.