I’ve been a Licensed Ham Radio operator for over 20 years now, I’ve had numerous radios and talked to people from around the globe; I’ve done so on equipment that ranged from high-tech top of the line gear to cobbled together radio parts and antennas that looked like some sort of mad science fair project. I’m not telling you this to brag, I just want you to know that when I recommend a product, or in this case tell you to stay away from a product, I do so from experience. 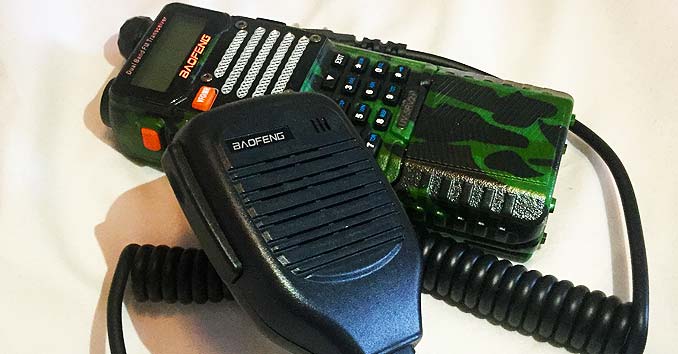 Baofeng Radios are infamous in the prepping community. Go to almost any prepping website and you will see read an article from someone telling you how you need these little radios in your bag, claiming they are the perfect prepping radio: BULLSHIT!

Buying Preparedness gear isn’t something that should be taken lightly, and counting on some cheaply made Chinese crap is only asking for trouble.

Listen, I really wanted to like these radios; I mean who wouldn’t want a radio that often times sells for a tenth of the price of the big boys? But when it comes to preparedness, price is often a reliable indicator of what you can expect.

I planned on doing a couple of videos showing real-world tests, showing you what you can expect from these radios during an emergency; but why bother? When you are shipped multiple units that won’t even reliably hold the battery pack without duct taping it to the radio, is there really even a point to going any further? Is that a radio that you would really trust in an emergency situation?

Baofeng has some of the worst quality control issues that I have ever seen. The radios are mass produced in China, and performance is really a crapshoot from radio to radio.

Baofeng Alternatives: Ham Radios that Preppers can actually count on!

When it comes to buying a radio that is specifically for preparedness purposes I recommend sticking with the big three: Kenwood, Yaesu, or Icom. Yes, the radios are more expensive, but the quality control doesn’t get much better. I also recommend looking for something that is specifically made for outdoor use in the elements, like the below Yaesu Radios.