The S.P.E.W, or the Small Pocket Everyday Wharncliffe, is a small Fixed Blade Knife from Columbia River (CRKT). It was designed by Alan Folts to be a lightweight, easy to carry, fixed blade knife.

I’ve been carrying the CRKT S.P.E.W. for the last month as my primary EDC and it’s really started to grow on me. I really like the way it feels; the grip is solid and I think it makes a pretty good choice for anyone looking for an EDC Defense Blade. 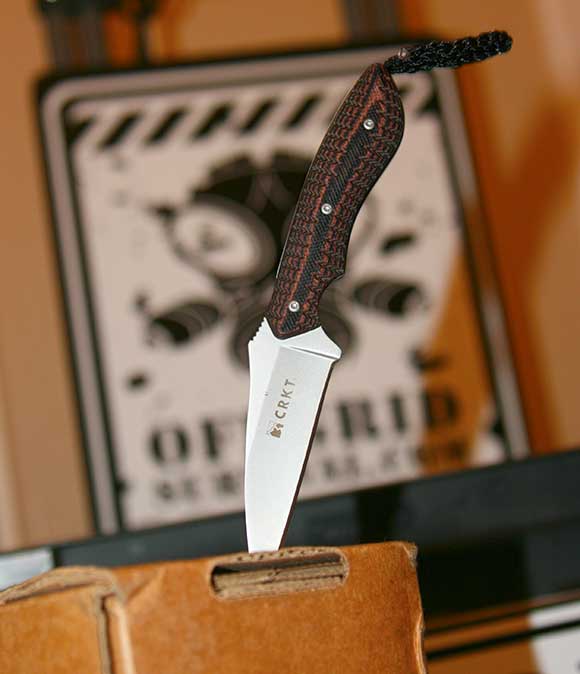 The knife is 6.25 inches in overall length, has a 3 inch blade and weighs in at 3 ounces. The handle is layered G10 and is textured to give it a solid feel. It also has a nice little Braided Lanyard which helps to extend the grip on the handle and makes it easier to draw out.

Its small size and weight make it a great every day carry knife and a good option for those who like to carry a small discreet Self Defense blade.

The blade is Chinese 5CR15MoV5 steel, which is one of the lower-end softer steels, so I was a little concerned on how well it would hold an edge. That being said, this steel is extremely easy to sharpen and might be a good choice for someone who doesn’t have a lot of experience sharpening knives.

While it’s definitely not my first choice of steel, it actually held its edge surprisingly well. It wasn’t the sharpest edge in the world, but for its price point I really can’t complain. I’ve seen knives for double this price that haven’t held an edge as well as the S.P.E.W.

It comes with a nice molded kydex plastic sheath that was one of the unexpected highlights of this knife. I really liked how it felt in my pocket and how securely it held the knife. It holds the knife very firmly while still allowing you easy access and release when removing the knife.

The sheath weighs in at 1 ounce making it perfect for every day carry purposes.  They also include a multi-position belt clip and neck cord which I loop around my belt when carrying in my front pocket.

Besides the steel, my biggest concern about this knife was its extreme tip. The tip of the knife is extremely fine and at first I was pretty worried how it would hold up under heavy use.

Although I probably wouldn’t recommend this knife as an everyday utility blade, I’ve been using it as my primary blade for the last 30 days and it’s held up surprisingly well. I’ve used it on everything from thick vinyl banner material and cardboard to rope and zip ties. After 30 days of use, the edge is still sharp and the tip is still intact. 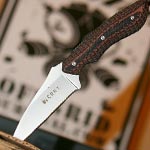 Thoughts on the CRKT S.P.E.W.

For under $30, which is what Amazon has it listed for

; this knife outperforms every other Wharncliffe style knife in its price range.