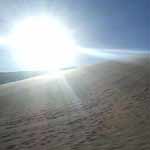 Recently, a reader was kind enough to share his experience on what happened to him while hiking a couple of years ago. Heat stroke is a very serious condition that can easily kill a hiker who doesn’t know what to look out for. Here is his story:

I have to tell you….  Just went through quite a weekend here….but Bob is home from the hospital and back at work.  Bob??

He went hiking on Mt. Diablo in Concord Saturday, alone; in what he thought would be heat in about the 80’s.  Brought lots of water….it turned out to be 104 degrees; he was nearing the end of his water on the way down around 3pm, so was rationing it.  Fast forward: he was “found” on the trail, collapsed in the hot sun and unresponsive, dehydrated and beyond heat exhaustion to where he was no longer sweating.  Some bikers found him; a park ranger called in the ambulance, and dumped water on him to bring down his 103 degree body temp. He was rushed to the hospital, grey and “shutting down.”  (Eeeeeeeek)  Lots of fluids, lots of care, kept overnight, he was back at work Monday, in disbelief that could happen to him, the experienced hiker….

I however, was at home “recovering” on Monday.   Almost no sleep Sat. night; and of course my usual after the fact trauma, having been totally on top of things during the crisis.  Which it was: the park ranger told me we were lucky; it doesn’t always turn out this way (alive).  The fact that Bob was near the bottom, and therefore accessible (rather than five miles in), made a big difference, and that he’s otherwise healthy and in good shape, which aided recovery.  But wow. What an experience. He’s banged and bruised a bit from apparently falling in the collapse, but gee, he’s breathing.  I can stand the funny colors for a while…

I got “the call” from the hospital while in IKEA, of all places.  I got to the hospital, 45-60 minutes away, in about 30 minutes, mindful of not winding up in the bed next to Bob.

When I got there, he was “asleep,” sedated from the delirium, hooked up to everything, and being rehydrated.  He later described weird/bizarre hallucinations, probably in the ambulance, which sounded like an out of body experience.  This was all very interesting, except that it was in the context of Bob’s survival. I’ve now restricted him to our local Redwood Park where “hot” is 75.  Egads.  Have a nice day. :)  So what’s new with you?  Love, Muri, and still, Bob

2.  His view of the incident in a letter to the park ranger who helped him.

I’m sorry that I didn’t get the chance to thank you over the phone or in person for helping me when I collapsed on Saturday, July 18 near the Mitchell Canyon trailhead.  Maybe email is the easiest way to communicate.  Fortunately all my tests at John Muir Hospital in Concord came back excellent.

Here is my hiking background.  I’ve hiked for over 40 years, mostly by myself and I’ve never had anything happen to me.  Maybe I’ve been lucky but I take precautions to minimize risk.  The peace, quiet and beauty of my surroundings while on a hike are something special that can’t be replicated anywhere.  It’s magic to me.  Hiking at my own pace and taking photos while I hike is what I enjoy.

I’ve hike many trials on Mt. Diablo over the last 10 years in all seasons and always bring a map.  I’ve done the hike from Mitchell Canyon to Twin Peaks to Eagle Peak to Muruchio Gap and back via the Back Creek Trail over 6 times. On hikes of this elevation change and distance I typically bring two liters of water and almost always have ½ liter of water left when I return to my car.  My biggest fear has always been of mountain lions.  That is why I carry an air horn.

I thought the weather forecast had a high of 84 for Walnut Creek on Saturday.  Obviously I was very wrong.  If I had known it would be over 90 degrees, I would have gone to Mt. Tamalpais.  After lunch at 1PM on Eagle Peak I realized that I was low on water.  On the way back I rationed the remaining water and limited myself to a mouthful of water every 15 minutes.  That was an inadequate amount.

What I feel are my mistakes on this hike.

The results of my stupidity
My wife said that the bicyclists found me near the trail head and poured water over me to cool me down. She said I was unconscious and unresponsive.  Approximately where and when was I found?

I would appreciate any other information you can provide about the incident, your input, what you recommend I do differently in the future and even my stupidity about hiking alone.  I know it’s dangerous but I enjoy the peace and solitude of the wilderness.

Thanks for your help and feedback,
Dumb hiker (me)

3.  The park ranger’s view of the incident.

Dear Hiker,
I wanted to apologize for the delay in responding to you- my schedule is very unpredictable.  Here is basically a synopsis of what occurred as I was involved.  I started my shift at Mitchell Canyon at 3pm and began working on some paperwork.  At approximately 3:30, I received radio notification from our dispatch center (located in Monterey) that a male subject was passed out at the Mitchell Canyon Fire Road gate.  I immediately requested that they notify Contra Costa County Fire Protection District to respond as well.  I arrived at the gate within a minute of receiving the call and while parking observed the two bicyclists pick you up and carry you to the picnic table in the shade located right next to the green gate at the beginning of the fire road.  No one knows how long you were unconscious for- it could have been a minute or thirty minutes.  While treating you, no one passed us going up Mitchell Canyon Fire Road or going down.

Once I got my medical equipment out, the bicyclists began pouring water over your forehead to try and cool you down.  It was immediately apparent that you were suffering from heat stroke- skin that was hot and dry, unconscious, unresponsive to voice or pain (pinching on arm), rapid pulse (130+) and the fact that you were out hiking in the heat.  While I was checking your blood pressure, pulse and breathing we continued to pour water on your forehead and chest.  I also got several ice packs for under your arm pits, behind your neck and your groin.  Basically, we continued to try and get you cool until Contra Costa Fire and American Medical Response ambulance arrived on scene.  They arrived approximately 15 minutes after me and took over patient care.  The fire fighter/paramedic started an IV and then we prepared to load you into the AMR ambulance.

You left the parking lot and went enroute to John Muir Concord at 3:59.   Later in the evening my trainee and I stopped by to ensure that you were doing well and the hospital had all the information needed to contact your relatives.  This is where we met your wife who was in the process of notifying family members.  I explained to your wife what I had done and where you were found.  I wanted to give your wife as much information as possible but not add to the worry or stress that she was already dealing with.  I’m not sure why your toes were bruised, when you were on the gurney, I asked the AMR paramedic if he wanted me to take off your shoes.  At that point he began to take them off and I put your wallet in your shoes so you could be identified at the hospital and they could notify your family.  Everything looked normal with your feet and my goal to get the shoes off was to allow better circulation and more cooling.

Heat stroke is a very serious condition which has unfortunately resulted in one fatality at Mount Diablo this year.  It was not a highly publicized case but late in June we had a fatality of Clayton resident who was only 49 years old. Basically he tried to do more than he should have given his physical condition and the weather and was unable to get immediate help due to his remote location.  We located him within about half an hour with the assistance of a CHP helicopter but there was a delay in notifying 9-1-1 of his condition and he deteriorated extremely fast.

As for what you did right…there are a lot of things- water, food, all the supplies in your pack, your health, knowing where you were going, knowing your abilities, etc.,.  As for what was out of your control…the heat (it was much hotter than forecasted) and how your body reacts to heat.  Things to keep in mind for the future…bring more water than you think that you may need (you might need to share with someone on the trail who is in bad condition), begin drinking water on the day before the hike, immediately notify others if you feel dizzy, have extreme cramps, can’t think normally, etc., this can be done via cell phone or just by letting others on the trail know that you may need help (this is not uncommon and I have given at least 50 people rides to their cars during hot days in the 8+ years that I have worked here).  While it is always best to hike with someone else, I understand and support your reasons for hiking alone.  I run 4-9 miles in various parts of the north side of the park (since I live here) and I always run alone.

As for the mountain lions- they are definitely around but are more of a concern traditionally in the border between development and open space.  Most healthy mountain lions will know when you are around and you won’t see them.  The older/sick lions hang out along the developed/undeveloped areas because there is food in the backyards and on the trails (domestic animals) that is much easier to hunt than a healthy deer running up a steep hillside.  Here is a link from the Department of Fish and Game that provides good information about mountain lions.  I’m not saying don’t carry the air horn- it is definitely worth the weight to carry to ward off a mountain lion or to let us know where you are if you are lost.

If there is anything that I did not cover, or if you want additional information, please don’t hesitate to contact me.  Sorry again for being difficult to contact but we have had a lot of stuff going on and as usual we are short staffed.

Take care during your recovery period and hopefully we will see you in the park hiking again.