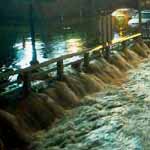 As Superstorm Sandy makes its way inland, it’s left a wave of destruction that stretches hundreds of miles and over 15 different states. The East Coast woke this morning to find widespread unthinkable devastation, mass transit systems that could take weeks to bring back online and a power grid that has been decimated in some areas.

7.5 million people are without power, many of those will be without power for at least a week. Con Edison is telling customers that it will take at least 7 – 10 days to restore power, as much of the East Coast still remains underwater.

A spokesman for Con Edison said “We have to assess the damage,”… “Now we have to get in there, get the salt water out, basically the dried salt, dry the equipment, test it and then make sure it’s safe to restore the power.”

New York was among the hardest hit after seawater overtook large parts of the city, causing a complete shutdown of the city’s Mass transit system. A spokesman for MTA said the superstorm caused the worst damage in the 108-year history of New York’s subway system. All ten of the underground tunnel systems have been flooded with seawater and there’s no timeline for when the transit system will be back up and running. 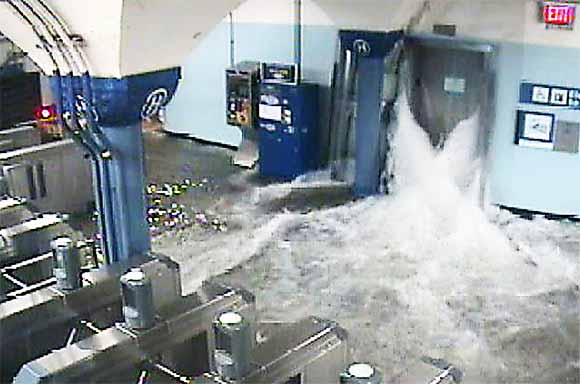 New York City experienced over 2o major fires during the storm, with the most severe one in Breezy Point, Queens, that burned more than 80 homes.

The death toll from Sandy has reached 26 people and is expected to climb as rescuers move into the affected areas. Millions are without power, and rescuers expect to find a large number of people trapped in homes and sky rises throughout the East Coast.

The superstorm itself is expected to wreak havoc for at least a few more days as it makes its way across land, bringing blizzard conditions to areas of West Virginia. Over 250,000 people in West Virginia are without power and forecasters warn the storm could drop 2 to 3 feet of snow across the state.