Technology is changing the way we live, unfortunately it’s also making it easier and faster for criminals to communicate, plan, and execute their crimes. With the advent of texting and social media, it’s never been easier for large groups of criminals to come together and wreak havoc in a matter of minutes. This makes it incredibly difficult for the average person to protect themselves from being caught up in a bad situation.

The latest criminal threat is something that’s been dubbed “Flash Mobs”. 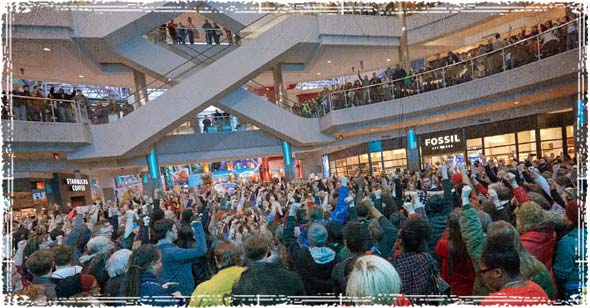 Flash Mobs actually started as a pretty innocent online trend where people would use social media to spontaneously gather large groups of people in a set location. I suspect that a lot of these early flash mobs were driven by marketing companies as a way to promote their clients products and services.

The Flash Mob trend is now being used by gangs of criminals to quickly overrun a business in order to steal, loot, and even intimidate business owners into complying with the gang’s demands. 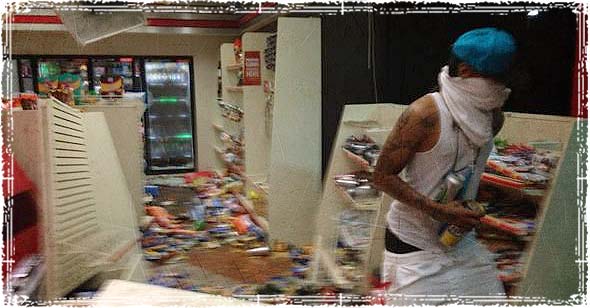 But it’s not just business owners who are in danger. In fact, these same tactics are now being used to assault innocent people on the streets, rob victims inside these stores, and even steal people’s cars at major intersections throughout the country. These Flash Mobs are becoming increasingly unpredictable, more violent, and in some areas of the country are becoming an everyday occurrence.

How Quickly the Mobs can Turn Violent

In the video below, taken by a shopper at a Jacksonville, Florida Walmart, somewhere around 300 out-of-control teens stormed the store after a party. The Mob rushed through the store knocking people over, stealing large amounts of merchandise, and vandalizing everything in sight.

In this video an innocent man is violently attacked on the streets of Philadelphia by a Flash Mob.

In this video out of Detroit, security cameras caught a group of criminals storm a gas station, and then the violently beat the clerk. Residents say that this type of activity has become an almost daily occurrence that has been largely ignored by local law enforcement and the media.

So What can you do to Protect Yourself from Flash Mobs?

Stay aware of your surroundings at all times. Flash Mobs can literally overtake an area in a matter of seconds. If you get the slightest premonition that something may be wrong, you need to listen to your instincts.

Keep an eye on the crowd. If you notice an abnormal increase in the number of people in your area, this could be the first sign that something isn’t right. Immediately scan the area and try to get a feel for the types of people who are walking around. By in large, most of these Flash Mob crimes are conducted by teenagers. If you’re in a store that suddenly fills up with teenagers, it’s probably a good time to make your exit.

Beat them at their own game. The last thing I want to mention is using the same technology that these criminals use to your advantage.  Although these Flash Mobs can often seem to spring up out of nowhere, they are often heavily promoted or talked about on sites like Twitter and Facebook. If you plan on going to a mall, or somewhere that may be targeted by these groups, jump on Twitter and type in the name of your destination. It only takes a couple of seconds of your time, but those couple of seconds can warn you to any impending dangers.

So what happens if you find yourself in the middle of a full-blown riot?

The first thing you want to do is quickly assess the situation. Whenever I go into a building, the first thing I do is quickly scan the area. I make sure that I have a pretty good sense of where the exits are, or where I would go if all hell breaks loose. If you failed to look for the buildings exits upon arrival, quickly scan the area to see if you can make a quick getaway. If you’re near an exit get out as fast as possible.

You don’t see an Exit, now what? If you were not able to make a quick exit, the next thing you want to do is try to blend in. If that means momentarily blending into the crowd by pretending to cheer for the idiots make sure you do whatever it takes to seem like your one of them. If everyone is shouting about something, then you should be doing the same thing. By blending into the chaos and not drawing attention to yourself, you will be less likely to become a target. But remember your number one job is to keep looking for the quickest possible escape route. As soon as you find it, get the hell out.

Go with the flow – This is something that I recommended in last year’s article, “surviving a riot.” Think of the mob as a large raging river. The best way to get out of a river is to swim with the current and slowly make your way to the edge. The same thing applies in this situation. The last thing you want to do is to yell, scream, cut through the crowd, or draw any unwanted attention onto yourself. Stay Calm, go with the flow, and work your way to the edge. Then quietly slip away to safety.