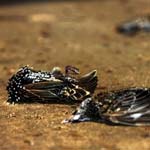 It appears that 2012 is kicking off the same way last year started, with more bizarre animal deaths. Yesterday we told you about the thousands of birds that fell out of the sky for the second New Year’s Eve in a row in Bebee Arkansas.

Well this morning Norwegians woke up to find millions of dead fish on the shores of Kvaenes, in Nordreisa. The schools of Herring are literally blanketing the entire shoreline.

It looks like part of same pattern of bizarre animal deaths that all started last year in BeBee Arkansas. (check out last year’s article for more info). Let’s hope this isn’t the beginning of something bigger.

Last years die off was initially blamed on everything from fireworks to massive lightning strikes, all of which have been debunked.

Last years events in Bebee, Arkansas kicked off a month of bizarre animal deaths, including thousands of birds falling out of the sky in communities around the world, as well as millions of fish that washed up on shorelines in a number of countries.