Does Technology have a place in Preparedness? 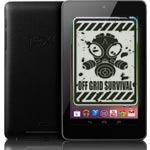 The use of electronics during a survival situation is a hotly debated topic. On one side of the coin you have those that feel modern technology has no place in preparedness planning; most of these people often worry about things like an EMP attack or a total melt down of the power grid. While both of those scenarios are definitely possible, and would turn your electronics into nothing more than added weight in your pack, should they really be enough of a reason to swear of survival technology?

In my opinion, technology – if used in the right way – can play an important part in your overall preparedness efforts. While I would never rely on any of these devices as my primary source of survival, I do think adding some electronic equipment to your gear might be a good idea.

These are one of my favorite items, and in my opinion they are a great resource for preppers and survival minded people. Combined with a small solar charger like the Solio Bolt

, most of these modern tablets and e-reading devices can be run for 5 – 10 years without ever having to plug into the grid.

or the Google Nexus Tablet

would be a good option for those who are looking for a way to store valuable survival related material. Both devices can hold thousands of survival books, videos, PDF’s, maps and other useful survival material. Think of it this way, how many survival books could you comfortably carry in your pack?

I can guarantee it’s not as many as you can carry on one of these tablets. Both of the tablets mentioned above can store an entire bookstore of material; all in a device that weighs about a pound.

Besides the obvious ability to make calls during small-scale disasters, a smart phone has many other survival related uses.

From being able to store maps and navigational information directly to your phone, to the ability to store books and other survival related material, a smart phone is another great way to carry a vast amount of survival information.

During the initial stages of a disaster, HAM Radio operators are often the only line of communication in or out of the affected area. Their ability to communicate when the grid goes down is one of the major reasons I advise our readers to look into HAM Radio.

In a survival situation, communication and the ability to quickly gather information are both going to be critical factors in determining the outcome of your situation. Don’t underestimate the power of staying informed. For around $50 you can pick up a decent dual band radio

that can easily be powered with a small solar charger.

Solar chargers have come a long way over the last couple years. From small pocket-size models that weigh in under a pound, to the lightweight Brunton SolarRoll

; solar power is now affordable, lightweight and can easily be carried in any backpack or bugout bag.