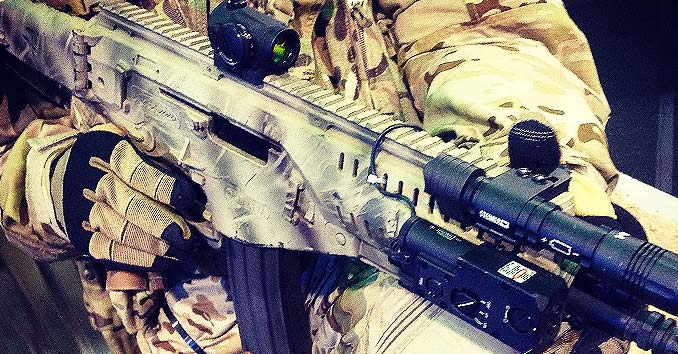 Your weapon of choice could mean the difference between life and death when the shit hits the fan. Having the ability to protect yourself and put food on the table whether it’s the next hurricane Katrina, terrorist strike, or zombie apocalypse, is one of the most important considerations for any survivalist.

Whether you’re new to survival or are a seasoned prepping expert, you may not know what to look for in a survival gun. The best firearms for survival have the capability to serve multiple purposes, so try to keep that in mind going forward.

When looking at the best survival guns for when SHTF, it’s important to keep a few things in mind. First, your guns need to be low maintenance with the ability to run dirty if necessary. If I have to clean my gun after each use, it’s not worthy for my survival stash.

Second, how popular is the ammunition? Owning guns in popular cartridges is an important aspect to consider. If you can’t find ammo for it, it’ll be useless for you. It’s really only necessary to have so many survival guns, because you’ll only fit so many in you bug out bag. If none of them are in the calibers we’re about to discuss, chances are good that you may find yourself up that paddless creek.

Finally, what is the purpose of the gun? Each survival firearm you have should serve you in some way. Is it good for hunting? Home protection? Patrolling? All three? You need to have a solid understanding of this, going forward.

We’ve broken this short list of the best survival guns down into main caliber categories, with a few sub-categories where actual guns are listed. I do feel like I need to say that you don’t need to run out and buy all of these, but one or two of them should suffice. Then again, buying all of them sounds like a good idea, too.

Also, this is a list of suggestions. You may substitute as you feel necessary. Here are some of the best survival guns on the market: 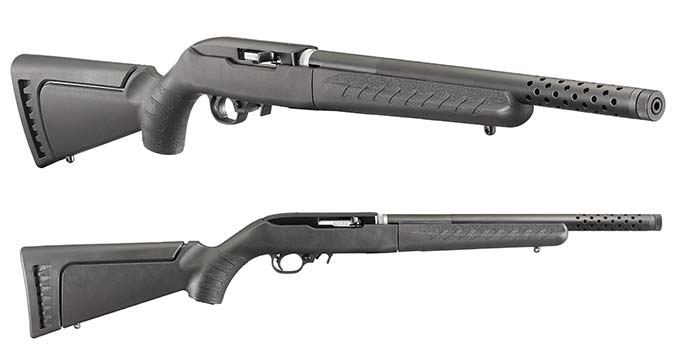 The .22 Long Rifle is one of, if not the most, abundant cartridges in these United States. Why? Because everyone and their uncle owns one. And, chances are already good that you own at least one firearm chambered in this fun to shoot caliber, too.

Make no mistake about it, the .22 is nothing to sneeze at and is more capable than you might realize.

A good friend of mine put a deer down with a well-placed shot from a Ruger 10/22 rifle. While not ideal to hunt big game or in self-defense, the guns chambered in .22 will suffice if it is what you have. Furthermore, they are excellent for taking small game, and the ammo is insanely easy to stockpile, even at inflated prices like we’ve been seeing in past years.

I have also listed a gun chambered in .22 Magnum, as well, hopefully for obvious reasons. While .22 WMR is harder to find because it isn’t as popular, it has its own unique benefits, which is why I chose to include it, here.

This is currently one of the most abundant .22 rifles out there, and with good reason. It’s accurate, easy to shoot, inexpensive, and even comes in a model that breaks down into a backpack. This rifle is a great pick for teaching younger shooters how to plink around, learn the mechanics of shooting, and build confidence.

It doesn’t get any more basic than a lever action firearm. And, one chambered in .22LR is perfect for many applications. Once again, this is a good firearm for teaching a newer shooter the basic mechanics, and building confidence. In fact, my 9-year-old girl has one in our gun safe that she’s currently learning on right now.

A lot of people automatically allow their minds to drift to the rifle platform when thinking of the .22LR cartridge. There is so much more to it than that, though. One platform that comes to my mind, is a .22 revolver. These, once again, are great for teaching mechanics to newer shooters in your prepping community, and are also fine for taking smaller game at shorter distances. These revolvers have an 8-round capacity, so that leaves a lot to be desired when compared with the next gun on the list …

I suspect some of you to be rolling your eyes right now, thinking, how does this guy include a Kel Tec with the likes of Henry and Ruger? It’s simple, really. When was the last time you held a factory 30-round handgun? Another thing you have to remember, is that sometimes you need a shorter gun that’s easily maneuvered through the house, by someone who is recoil sensitive. The .22 Magnum chambered PMR 30 is great for people newer to shooting who still want protection, or those who are unable to handle the recoil of a bigger cartridge. Oh, and they’ve got 30 rounds to put holes into bad guys with, and target re-acquisition is easy as hell with this one. 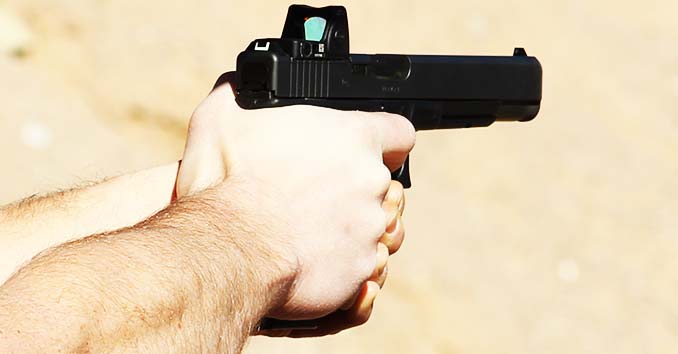 Moving on to 9mm, if for no other reason than the abundance of the cartridge. Think about it–some police units use it, the military use it, and the FBI just switched to it. 9mm is also one of the most carried cartridges available today. Therefore, if you don’t have at least one gun in 9mm, you need to. It’s also cheap enough to stock up on, so you’ve got some for when it counts.

Glock, Springfield, and Sig … Oh my!

If you weren’t sure by the cheesy throwback to the Wizard Of Oz in the subheading above, all it’s saying is that it doesn’t really matter what kind of 9mm pistol you have, as long as you have one. Oh, it should also be reliable and not need to be insanely clean all the time.

As a side note, I don’t own a gun unless it runs dirty. After all, I may not always have access to gun cleaning gear, but will always need my guns to work flawlessly in case I need to use them.

One thing that many people don’t think of the 9mm as is a hunting cartridge. Well, that’s likely because it isn’t actually a hunting caliber. But, a 9mm carbine can be used in a pinch if you’re starving. Oh, they’re also great tactical weapons, and the longer barrel does a good job of pushing an already fast-moving projectile even faster. Good for home-defense and patrols–and okay for hunting up to medium sized game with a well-placed shot, even though there will be associated meat damage.

The 5.56 NATO cartridge has come under a lot of scrutiny over the last few years. After the latest wars, many have said it’s insufficient to stop a charging man. As someone who was an active duty Marine for 4 years, I’m still forming my opinion. One thing I can say, however, is that ammunition will be abundant, and is relatively cheap. Plus, the rifles are easily cared for, accurate, and don’t beat the hell out of your shoulder.

I feel like this should be a no-brainer at this point. If you don’t have at least one AR-15 style firearm you’re behind the curve. The main idea, is that these are popular firearms so if yours breaks, you can find parts to fix it, or locate a different one altogether. Plus, ammunition is widely available for it, because police and military use 5.56 NATO rifle cartridges, and so do most gun owners. As a bonus, an AR-15 can be used for patrols, self-defense, home-defense, and hunting. This is one of the most versatile weapons you can ever own. As a bonus, they can be highly customized to your heart’s content.

When SHTF, one of the most abundant rifle cartridges will be 7.62X39, simply because of how cheap it currently is, and the AK’s recent spike in popularity. As a bonus, it’s a hard-hitting rifle cartridge that you can hunt with, do patrols, home-defense, etc.

The AK, or Automatic Kalashnikov, or Avtomat Kalashnikova, are abundant, suitable for hunting out to 50-75 yards, and are easy to fix in the rare occurrence one breaks. As an added bonus, they field-strip easily and can be dropped in the mud with the ability to still fire because of how they’re built.

This is a personal pick for me, because I like roller lock, delayed blowback firearms. The one I’ve got is actually a braced pistol, and it is accurate out to 150 yards. As a bonus, I’ve never had a malfunction with it in almost two years of abuse. As a downside, finding parts for something like this would not be easy to do, so keep that in mind. 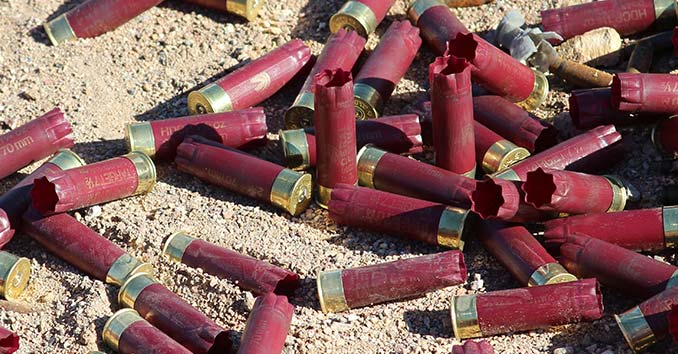 A 12 gauge is great for just about anything you can think of. I own several: one for home defense, one for hunting, and a few for giggles … hehe. Anyway, the 12 gauge is a versatile weapon because they can shoot many different kinds of ammunition from bird and target shot, up to buck and slug. As a bonus, you can literally pick up a used Mossy 500 for about 300 bucks. Not too shabby.

Both of these are great choices, but I wouldn’t discount a pump or semi-auto 12 gauge from any known manufacturer.

I wanted to include a bonus, simply because of its versatility to shoot more than one type of cartridge, that is semi-popular among revolver enthusiasts. The .357 magnum revolver can shoot both .38 SPC and .357 Magnum. Both cartridges are fairly popular, and many gun owners own some ammo for one of them. They can be used for hunting and defense, but the ammo and guns can be expensive.

These revolvers come in different sizes and barrel lengths, and one or two of them even come with a 7-round capacity. And hey, the ability to send more rounds downrange is always a good thing, in my opinion. These can be expensive, though, so keep that in mind.

I’ve got one of these, in brass, and it’s a blast to shoot. It’s a lever action rifle capable of shooting .38 or .357, and can be used for hunting and just about anything else you feel like. The one I’ve got is accurate at 100 yards, though the shiny receiver isn’t likely the best for survival situations where you need to stay hidden. To combat this, they do offer steel ones, as well.

The best gun is always the one you have. Even if you don’t own a single gun from this list, but you’ve got something, you’re already ahead of those who don’t. Preparing is more than just stockpiling food. You also need to be able to protect it, and have the ability to bring more food home, as well. If you didn’t know where to start, this list of the best survival guns should hopefully help you on your journey to be more prepared.

About Josh Gillem
Josh is a lifelong practitioner and student of the gun. He grew up shooting/hunting with his dad, and was given his first gun, a 12 gauge shotgun, when just a small boy. After high school, he joined the Marines where his love for firearms blossomed as he qualified with an M16A2, an M9, and a 240G. Josh has been writing about firearms and tactics for several years, is a staunch supporter of the Second Amendment, and believes that each individual person has the right to self-defense by any means necessary.
Josh Gillem's Down Range Daily

Urban Survival & Wilderness Survival are two very different things. When looking for Survival Kits for Rural or Urban Environments, make sure you don’t get caught up in the wilderness survival marketing gimmicks… […]