These are six very common mistakes I see people make, that in my opinion, could be detrimental to your ability to survive. Just a warning, relying on Gear, Guns, and Ammo are all on the list…..

Not Having Enough Water

Stocking up on water is not glamorous, it’s certainly not sexy, but your life sure as hell depends on it. This is one of the biggest mistakes I see; it’s also the deadliest one we can talk about.

I really can’t overemphasize how important it is to have a clean drinkable emergency supply of water. While stocking up on water may not be as exciting as buying guns, ammo, and gear; it’s one of the most important things you can do, and should be number one on your list of priorities.

They put too Much Importance on Their Gear

What kind of gear should I Buy? This is one of the top questions that I receive from new readers; it’s also something that takes away from what you should be focusing on: knowledge. 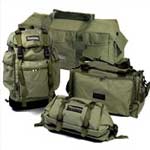 Newbies, and even some old timers, often obsess over their gear. They sometimes put so much emphasis on stockpiling gear that it can actually start to hinder their ability to survive without it.

I love survival gear as much as the next guy, but the problem highlights something I see in all aspects of society: our culture has become addicted to the quick and easy fix. In survival, that doesn’t exist. There’s no silver bullet, there’s no magic piece of gear, and nothing except good old fashion knowledge and training will improve your odds of surviving a disaster.

They lack the Knowledge it takes to Really Survive

KNOWLEDGE in the key to survival. What, didn’t you just say that?

Yes, I did and I’ll say it until I’m blue in the face if that’s what it takes for people to get up off their butts and learn what it really takes to survive.

You can own every piece of survival gear ever made, but if you lack the skills to survive that gear is useless. To be truly prepared you need to learn how to survive without your gear.  Once you have a good grasp of what’s needed to survive without it, then you can start to focus on what gear you should buy.

I’m not trying to pick on Rice & Beans. They’re actually one of my favorite foods, and in my case, they might be the perfect food to stock up on. The point I’m really trying to make, is you need to tweak your plans to fit your unique situation. If rice and beans are what you normally eat, then by all means, go ahead and stock up on rice and beans.

Just remember that buying a truckload of emergency food that you’ve never tried, or would never normally eat, is not only expensive, but it could get you killed.

An emergency situation is never the time to find out how your body will react to certain foods. The last thing you need during a survival situation is to find you don’t like the food you stocked up on; even worse would be finding out you have a life threatening food allergy. And even if something that drastic doesn’t happen, do you really want to be stuck eating foods you hate?

Becoming too dependent on your Guns & Ammo

Oh no, I said it. Bring on the hate emails and the angry comments. But before you get too upset, give me a minute to explain.

I love guns! In fact, I think they’re one of the most important items that you can have. That being said, there are a number of people who I’ve encountered over the years that think having a gun means they’re somehow prepared to survive anything. I’ve actually heard some people say, “I don’t need to stock up on supplies. I’ve got all the guns and ammo I need to survive.”

In my opinion, that type of thinking is not only juvenile, but it also shows a complete misunderstanding of what it really takes to survive. Stocking up on guns and ammo is definitely important, without them you’re putting yourself and your family at risk, but it’s also not the be-all-and-end-all of survival.

During a crisis situation, people will likely become one of the top threats to your safety and security.

While the world may be filled with millions of good and decent people, in a crisis situation these people can and will quickly become unpredictable. In my opinion, during a disaster of any size, the most dangerous locations will be large cities or areas that have a high density of people. This is a threat that must be considered.