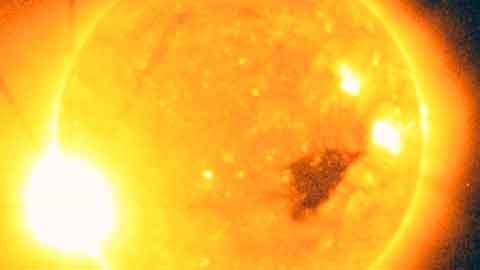 The strongest solar flare since 2006 is expected to hit earth some time on Feb. 17th or 18th. This round of solar storms has already caused some problems to radio communications in southern China, and could cause more disruptions throughout the week.

A solar flare is a gigantic explosion on the sun’s surface caused by magnetic activity. Activity on the sun is heating up as we gear up for the projected solar maximum sometime around 2013.

These types of coronal mass ejections can cause a number of problems including: Radio and communication blackouts, disruptions to telecommunication and electric power grids, and disturbances in the earth’s geomagnetic field which can cause problems for GPS devices.

While we do not know if this particular flare will cause any damage, NASA has confirmed that the event is the beginning of heightened activity on the northern hemisphere of the sun. They warn that there is a very good chance of seeing large solar flares over the next three days.

Past solar flares that caused problems:

1972 – A geomagnetic storm knocks out  telephone communication across Illinois.

The “Carrington event” 1859 – this flare was so powerful that it could actually be observed with the naked-eye.  It caused massive damage to telegraph systems throughout the world. Telegraph operators received shocks, telegraph papers burst into flames and aurora-induced electric currents sent power through telegraph machines allowing messages to be transmitted even after being disconnected.

While this flare will be nowhere near the 1859 Storm, if a Carrington size event happened today it would likely cause massive long term damage to our entire power grid and it could knock out power to a large portion of the world.