I read a story this morning about a 12-year-old boy who managed to stay alive in the wilderness by using techniques that he learned in the Boy Scouts.

The story illustrated the importance of living the “be prepared” motto of the scouts and is a great example of how even a small amount of training can make the difference between life and death. 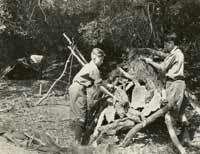 The young scout, who got lost in the Utah wilderness managed to keep himself alive by making a crude lean-to shelter and covering himself with dirt and debris. As temperatures dropped into the 30’s the scout who was wearing only jeans and a t-shirt kept his body warm by building the shelter that he learned about in Scout Camp.

What’s sad is most adults would not have survived in a similar situation. In fact, the news is filled with stories of people who have died or lost body parts as a result of similar situations. The training that this youngster acquired through scouting allowed him to think calmly and clearly during his time of crisis.

The fact that he was able to react and survive really highlights how and why training is so important to your survival. Training and knowledge are the keys to survival and should not be overlooked or taken for granted.