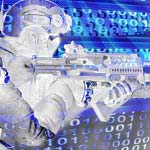 Cyber Security expert Eugene Kaspersky is making some dire predictions of what the future has in store, and it’s not very pretty. Kaspersky, co-founder of the Kaspersky Lab, is warning of an emerging cyber threat that in his words — could spell “the end of the world as we know it”.

Earlier this month his Cyber Security lab discovered the now infamous Flame Cyber Weapon. The Weapon, as he told Russia Today, is “the most sophisticated cyber weapon yet unleashed.” Flame, the largest and most complex type of cyber attack ever discovered, has a unique way of stealing information and spying on the infected user.

Flame can literally turn the infected computer into a sophisticated spying device by recording key strokes, recording audio and video through any attached audio or visual devices, and can even turn Bluetooth-enabled computers into beacons to download information from other Bluetooth enabled devices. While Flame may be the most sophisticated cyber weapon yet discovered, it’s not the only thing that has Kaspersky concerned.

In a speech at the Tel Aviv University cyber security conference, Kaspersky warned:

“It’s not cyber war, it’s cyber terrorism, and I’m afraid the game is just beginning. Very soon, many countries around the world will know it beyond a shadow of a doubt,”

Internet blackouts are really just the tip of the iceberg. While losing the internet might be devastating to some, and would certainly set us back a number of years, it’s actually the least destructive scenario that we’re facing. On top of an attack that would likely shut down the internet, a number of the top cyber experts in the world are warning that attacks on our infrastructure might be just around the corner.

The scary part about this escalation in government sponsored cyber warfare, is once the cat gets out of the bag it’s really hard to put it back it. Once these attacks are launched, they can be very difficult to control. The very nature of these indiscriminate cyber weapons makes them extremely dangerous to not only the intended target but the rest of the world as well.

A computer really has no concept of national borders. Once these threats start replicating, they will quickly cross these invisible border lines and take out important infrastructure throughout the world.

The threat is real, and the threat has the ability to literally set the world back 200 years in a matter of days.

Damon Petraglia, a Cyber-Terrorism expert and member of US Secret Service Electronic Crimes Task Force, shared his thought with us awhile back on what he thinks may happen:

I believe eventually it will be an agricultural terrorism attack coupled with a cyber–attack. The cyber-attack would target assets of critical infrastructure such as an oil pipe line, railway transport and freight, and perhaps a water supply. These attacks would not have to be particularly extreme, only enough to cause panic and divert resources to those attacks.

While the cyber-attack is being dealt with, coordinated attacks on agriculture at strategic locations throughout the USA would completely devastate us and much of the world. Mad cow disease turns up on two farms on the west coast, a fungus destroys a few unrelated wheat crops in the central US, med fly infestation at a few farms in the south. One must understand that agricultural disease and agents can be stockpiled easily, do not have to be weaponized, and can be administered as simple as touching an animal or walking through a field.

The economic toll would be devastating and the amount of food that would need to be destroyed would be unfathomable. It would cause economic ruin, panic, civil unrest, and a lack of faith in government as the government would be hindered in coordinating efforts at a federal or global level without a strong and intact infrastructure.

Everything in this country and throughout the world is now dependent on the internet and our vulnerable infrastructure. Banks, the electrical grid, communications system and even the way our food is delivered to the store could all be affected. If the grid goes down, most of the world has little knowledge of how to live without it.

The truth is, if an attack happens any time soon, this country is not prepared to handle the consequences. In fact, if terrorists or any rogue nation were to attack, the consequences would probably be far more serious than any other type of terrorist attack could ever be.

Three things you can do to prepare for this threat:

When the power lines go down, the internet blackout starts and the grid crashes; there is one line of emergency communication that will still be alive and well – HAM RADIO.  A good survival plan must include some type of emergency communications equipment. The ability to send and receive information, after the grid goes down, is vital to being able to survive that situation.

3. Stock up on the Basic Survival Necessities

Think about what things you need to survive, and start to stock up on those items now. Water, Food, Shelter and Protection should all be at the top of the list. In my opinion water, food, shelter and protection are the most important things that you can stock up on.  If you can cover those four categories then you will be far better off than 99% of the country.