How will you protect yourself and your family from an attack?

If you’re like most people I talk to, your first answer is probably with your guns. But what happens if someone gets the drop on you, or jumps you before you can get to your weapon?

I love guns just as much as the next guy, but to truly be prepared for anything you need to be able to protect yourself without them.

How to end the Fight Quickly – (remember these tips should only be used in a life or death situation, as they could cause serious damage or death)

When defending yourself from an attack, every move you make should be done in an effort to end the altercation as soon as possible. This is no time to start slugging it out or pretending you’re in the UFC.

Every single punch or kick that you throw should be delivered to the weakest or most vulnerable areas of your attacker’s body.  Your strikes need to cause serious damage, and your main goal should be to end the fight and immobilize your attacker as fast as possible. 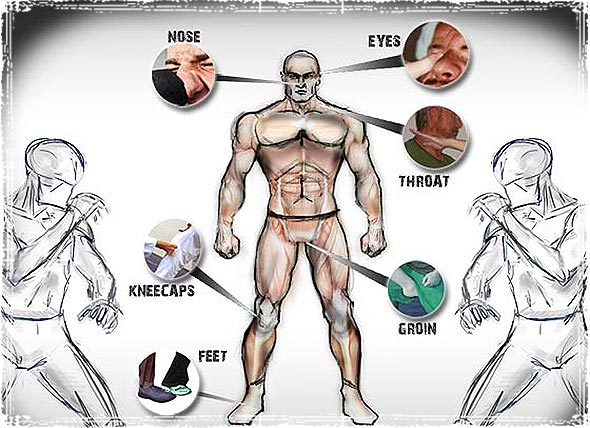 Eyes – If they can’t see you, they can’t hit you. Jabbing your attacker in the eye can temporarily blind them allowing you to gain the upper hand. If done hard enough, it can actually cause permanent blindness.

Nose – A Palm strike or punch to the nose can have a devastating effect on your attacker. While it probably won’t immobilize them, it may be enough to cause them to retreat. A well-executed strike to the nose will cause an immense amount of pain and cause the eyes to instantly fill with tears. This will allow you to either run away or quickly end the fight with a follow-up attack.

Throat – The throat is one of the most vulnerable areas of the body. When attacking the throat there are two areas that you should focus on.

Groin – A good kick to the groin can cause a man to instantly drop to the ground. Just remember that this target is usually the most well-guarded and may be difficult to strike.

Knee Caps – The Kneecaps are extremely vulnerable to attack and can be easily dislocated or broken by a well-placed kick to the knee. A kick to the side of the knee can also cause a huge amount of damage.

Feet – Stomping on your attacker’s feet probably will not end the fight, but it can cause a huge amount of pain. Foot stomps are often used to escape from a hold and can give you time to setup for your next attack.